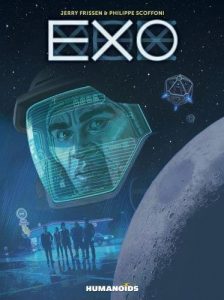 Every so often, and now and then, you’ll stumble across a book that makes your neurons fire a little faster, sends tingles of electrical excitement down your spin while inspiring your mind to peek around and over the walls that it’s been held behind by the humdrum mundanity of day to day existence and consider a multitude of new, interesting and different ideas. That’s what fantastical fiction, especially science fiction, should do. It should inspire it’s readership to make all sorts of strange and bizarre connections between the seemingly everyday facets of the world that surrounds us and it should remind us of the staggering awe and majesty of the universe and the endless possibilities that it offers. This is exactly what Jerry Frissen’s tale of first contact and humanity’s desire to reach out into the endless blackness of space, Exo, does.  As you sink into, and become increasingly involved in, the story and the lives of its characters, Exo makes you think. Frissen forces you to question, just as Greg Bear and Larry Niven did before him, populist ideas and thought about extra-terrestrial life and culture and what it would mean to meet a species whose concept of everything that we take for granted would be completely alien to our own.

Following the discovery of an exo-planet that, more than any other previously discovered, resembles Earth and as such has the potential for possessing life, NASA quickly formulates a plan to reach out to find out more about this new world, which they’ve named Darwin II. And in the wake of their discovery and plans, things begin to go amiss. The ISS is devastated by an object launched from the moon and a group of unconnected people seemingly operating under the influence of a benign intelligence aggressively reach out in an effort to exert control over NASA through means both nefarious and foul. Meanwhile, in response to the “attack” that came from the lunar surface, a team of US Marines, who have been secretly trained for such possibilities, are dispatched to investigate what came from the Moon, while on Earth one scientist who might just hold the key to the whole mystery, becomes the subject of an intergalactic tug of war. Discovering an aeon’s old plan to deal with humanities encroachment to the stars, both the men on the moon and those on Earth find themselves caught in race against time to save mankind as the secret origins of life on our world, and others, are revealed to all involved.

Stylistically, Jerry Frissen belongs to the same school of hard Science Fiction as the aforementioned Greg Bear and Larry Niven, but also has a penchant for Lovecraftian ideas of what may exist out among the stars, which manifests themselves in Exo’s underlying themes of self-realisation and the acceptance of who and what we are when faced by the cold eternity of Universal vastness. Exo is an intelligent, thought provoking, and at times cautionary, story of life and the expectations that we, as a species, have concerning it. But as well as throwing wonderfully big ideas about mankinds place in the galactic whole into the mix, Exo is also an incredibly human story in which it’s players  caught in events beyond their control, adjust and adapt to the new reality they’re immersed in. Coupled with Philipppe Scoffoni’s vivid, precise and rich art that has an almost cinematic feel, Exo becomes more than the sum of its parts, with each sub-plot and magnificently executed illustration connecting to form a fascinating whole.  It’s life, but not as know it… Tim Cundle