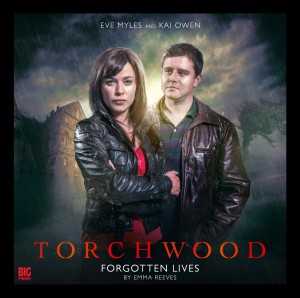 Big Finish are thrilled to announce the return of Eve Myles and Kai Owen as husband-and-wife
team Gwen Cooper and Rhys Williams in the third release in a new series of Torchwood Audio
Dramas.

“Captain Jack’s the poster boy, Ianto’s the style, but Eve and Kai are the heart of Torchwood,” says producer James Goss. “Listening to the two of them back together is an utter joy. We pick up their story after Miracle Day. How has life been treating them? It’s a delight to find out.”

Eve appeared in all 41 episodes of the popular BBC series, created by Russell T Davies. A dedicated police officer turned Torchwood second-in-command, Gwen fought tooth and nail to defend Cardiff and her family from the very worst the Rift had to offer. Husband Rhys supported her from home, keeping their infant daughter Anwen safe during the worldwide phenomenon known as the Miracle.

Eve and Kai return in Forgotten Lives. The couple are plagued by the same alien plot uncovered by Captain Jack Harkness (John Barrowman) in opening story The Conspiracy. Many years later, and Torchwood is just a fond memory for Gwen and Rhys. Then, one day, the phone rings…. Forgotten Lives is written by Emma Reeves who is the co-creator and lead writer of robot drama Eve for CBBC. Other TV credits include The Dumping Ground, Tracy Beaker Returns, Hetty Feather, Dead Gorgeous, Young Dracula, Spirit Warriors, The Murder of Princess Diana, Doctors and Belonging. She also writes for radio, and for stage, where her work includes the Oliviernominated adaptation of Jacqueline Wilson’s Hetty Feather.

‘I still can’t believe that I’ve been asked to write a story for the brilliant characters of Gwen and Rhys‘ says Emma. ‘I’ve been lucky enough to write for Eve before, on Belonging, and I know that she has a unique gift of imbuing every syllable with the deepest meaning. Getting Eve Myles and Kai Owen, too, is basically like winning the writer lottery.‘

Eve will make a return appearance later in the series; of which more details will be revealed soon!
Torchwood: Forgotten Lives will be released in November, and can be pre-ordered from the Big Finish website. Additional casting announcements will be made soon.