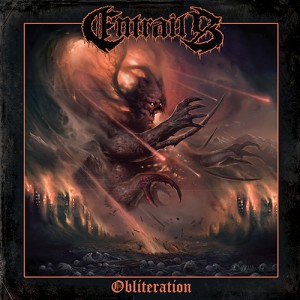 Swedish Death Metallers ENTRAILS have finished recording their fourth longplayer (2nd for Metal Blade) and are ready to unleash the fury! “Obliteration” will be released the 15th of May and is commented by the band as follows:

“It feels awesome to have completed all the recordings in our own “Bloodshed Studios” and get an outstanding mix from the mixterman Dan Swanö! Dan provided us with the “lost” Sunlight studio sound with a real 90s feeling. We sound more driven and the Death Metal is a bit rawer than before, we feel we are on the right path once again. Entrails continues on doing what we believe Death Metal should sound like!”

Death Metal guru Dan Swanö adds: “I guess Entrails have sold their souls to the devil, because there is no other way to explain how a band that’s been doing the same style of SweDeath for more than 20 years, can keep making better and better records! In fact, some of the tracks on this album are among the best Death Metal songs I have ever heard. Such a great album…it pisses me off!!!”

Listen to the 1st single “Beyond The Flesh” and check out the pre-order section at www.metalblade.com/entrails. There is an exclusive bundle available as well!

“Obliteration” will be released the 15th of May as a limited first edition Digipak-CD with two bonustracks as well as on vinyl and digitally.

“Obliteration” tracklist:
1. No Cross Left Unturned
2. Epitome Of Death
3. Beyond The Flesh
4. The Grotesque
5. Obliterate
6. Skulls
7. Midnight Coffin
8. Bonestorm
9. Abyss Of Corpses
10. Re-Animation Of The Dead