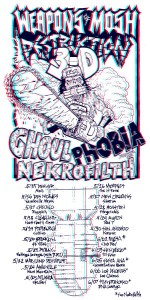 Following a short bout of downtime spent harvesting the dead, the masked mutants in GHOUL will return to the States for another round of live debauchery on this year’s Weapons Of Mosh Destruction trek, now in astounding 3-D! The three-dimensional beatings will commence on May 15th in Denver, Colorado and rampage its way through three weeks’ worth of dates including a stop at the Maryland Death Fest in Baltimore. GHOUL will be joined by California grind miscreants, Phobia, and Ohio scumsmiths, Necrofilth. 3-D glasses not included. As a precursor to the fetid festivities, the band will also contaminate the stage of the Rockbar Theater in San Jose, California as part of Kirk Von Hammett’s Fear FestEvil alongside Meshuggah, High On Fire, Agnostic Front and more!

Comments Digestor, “Greetings, numbskulls! It is I, Digestor, announcing that GHOUL is once again coming to your wretched country to cleanse it of the gutter trash that litter your streets and our shows. We are joined in this effort by legendary grinders Phobia, and sleaze masters Nekrofilth: two bands that we will no doubt miss after we are forced to murder and eat them at the end of the tour. And this time we are doing it all in 3-D, mainly because it allows us to charge more at the door. So, accept your fate, prostrate yourself in front of the altar of GHOUL, and die by the manifold murderous machinations of Weapons Of Mosh Destruction 3-D!”

In related news, GHOUL‘s Dissector and Digestor recently crashed the set of Brutally Delicious to whip up some Beef Carpaccio. For cooking tips from the greats, scroll on over to THIS LOCATION.

GHOUL unleashed their We Came For The Dead!!! release on waxy awesomeness late last year. Initially released in 2002, We Came For The Dead!!! was an instant cult classic in the most putrid depths of the metal underworld, delivering a slick, punk-infused style of American goregrind from an unidentified tomb in the depths of Creepsylvania, where they’ve since waged war on mortals from with full anonymity. GHOUL now offers up We Came For The Dead!!! on vinyl which includes a GHOULish rendition of Megadeth’s “Skull Beneath The Skin.” We Came For The Dead!!! is out now on Tankcrimes. Get in on the action HERE. And for the CD and digital format junkies, the album comes paired up with GHOUL‘s ghastly follow-up to We Came For The Dead!!!, Maniaxe, as a nifty two-for-one album deal available now. Who says GHOUL doesn’t like bargains. Order the CD HERE (or in stores worldwide) or the digital version HERE.