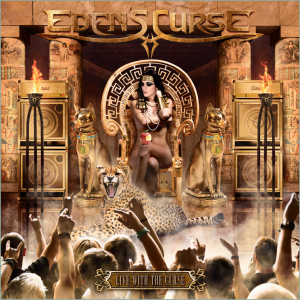 Eden’s Curse – Live With The Curse CD (AFM)
After a somewhat turbulent period, the multinational melodic metal maestros have reached an undisputed summit of brilliance. ‘Live With The Curse’ is the cherry on the top of the bands accomplishments. Almost resembling a greatest hits offering, due to content of the set list, as well as focusing heavily on the outstanding ‘Symphony Of Sin’ album and given a truly tremendous top-up by the addition of Serbian vocalist Nikola Mijic, Eden’s Curse are firing on all cylinders and running smoother than ever before. This clearly brings a tone of shear excellence to the delivery of the tunes, with the musical sounds creating massive presence, as well as capturing a real live feeling (without ridiculous overdubs) it’s nice to hear a natural audience response; well received. Featuring eighteen songs, a guitar solo, and band introduction section, the quintet have worked incredibly hard to deliver the full show here – ‘Live After Death’ stylee. Technically precise intricate guitar work, harmonious vocalisation, solid rhythms, and songs that ascertain depth and feeling… that is Eden’s curse. Metallic yet melodious. Powerful yet passionate. Now this is a double live album! Mark Freebase