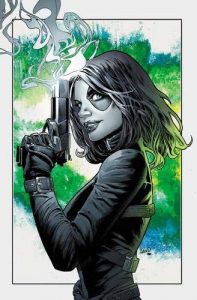 As far as the assassination game and doing questionable things for lots of money is concerned, the big Kahuna and undisputed king of getting the job done is good old reliable Wade Wilson. But just behind him, snapping at his heels is his old comrade in arms and all round badass Domino. Thanks to a mutant powered preponderance of extreme luck and a natural talent for the art of murder, she’s forged a reputation that terrifies even the most hardened of villains and law-makers alike. She may not be the number one gun for hire, but she’s definitely earned her place in the top ten. Mercenaries are people too though and there comes a time in everyone’s life when they attain a state of contentment, when it feels like they’ve finally achieved what they set out to do and have reached a place where they can actually be happy. However, when that happens to Domimo who at long last has found a couple of team mates, Diamondback and Outlaw, that she can trust and call her friends, that’s when her past comes calling to claim its pound of flesh.

History is the one thing that no-one can escape and when the truth of Domino’s origin is finally revealed to her friends in an orgy of torturous and brutal violence, she realises that in order to make her peace with who she is, she has to lay the ghosts of her past to rest before they catch up with her and everyone she cares about. Pursued by a duo of life-long nemeses that she never knew she had, Domino is chased half-way around the world in the pursuit of vengeance as she desperately tries find a way to resolve her situation as amicably as possible. The road to hell though, that’s paved with good intentions and it isn’t long before she comes to understand and accept that the only way to truly fight fire is with a full magazine and sharpened blade.

There are writers and then there’s Gail Simone. With a jaw dropping knack for characterisation and snappy, believable, funny dialogue and an innate ability to write pulse pounding plots, Simone never ceases to amaze me. She’s perfectly captured everything that Domino is in Killer Instinct and doesn’t shirk away from or try to disguise the fact that her protagonist as well as being a witty, sassy hero for the digital age is also a stone cold killer and fully embraces that dichotomy in a story told through a combination of flashbacks and explosive action that isn’t afraid to turn the heat up when needed and dial it down during its more introspective moments. Accompanied by the devastatingly detailed art of Baldeon, Shelfer and Piper, Simone has created a Domino story that it’s incredibly easy to fall in love with and by the time you reach the last page, leaves you desperately wanting more. Lock and load… Tim Cundle