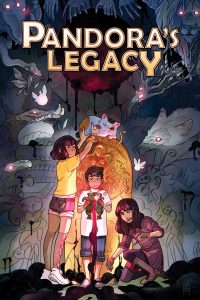 I’ve always been a sucker for mythology, particularly the Greek variety. I wish I could say that it was some divine literary moment that sparked my interest in the Hellenic heroes, Titans of antiquity and the Gods of Olympus, but it wasn’t; it was Ray Harryhausen. The first time I saw Jason and the Argonauts on the big screen, I was transfixed and the monsters, fables and folklore of the ancient world became an obsession that was partly, at least as far as my parents were concerned, responsible for my decision to study history at University.  Mythology and me, we go way back so when Pandora’s Legacy showed up, I maybe lasted all of five minutes before I gave in to temptation and submerged myself in its pages. And while it isn’t always best to give into that little voice that whispers in your ear and encourages you to indulge in your vices, this time I made the right decision when I acquiesced to its will.

First things first, let’s deal with the elephant in the room. Pandora’s Legacy is a YA book and its most definitely aimed at that specific audience, but that doesn’t mean that Kara Leopard’s story of familial obligation isn’t one that won’t appeal to all ages; it does. Maybe I’m just a big kid, but I’m also willing to bet that the legions of adults who were also fascinated by the on-screen voyage of the Argo will enjoy Pandora’s Legacy as much as their offspring, if not more. It’s a snappy, brief history of some of the slighty more obscure stories of Greek legend that unfolds when an unsuspecting trio of kids accidentally stumble across, and end up destroying, Pandora’s box while lost in the woods on holiday. With a little divine intervention and help from a Titan, they set about rectifying their error and while doing so, discover their true legacy. Avoiding a conventional happy ending, Leopard’s story, thanks to the energetic and vibrant art of the Matthews twins, is a fully immersive experience that hurtles along at a rate of knots and leaves you gasping for breath as it reaches its thoroughly satisfying finale. While it’s a complete, standalone story, Pandora’s Legacy also feels like it’s the beginning of something much bigger, and if someone, somewhere has to make a sacrifice to the Gods in order to transform it into a series, I’ll happily pay that price. Because, as the protagonists in Pandora’s Legacy discover, there’s always a price to pay and some things in life are more than worth the cost. Pandora’s Legacy is one of them… Tim Cundle