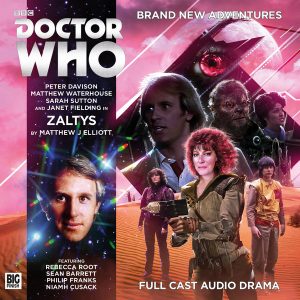 Zaltys is the reason the Doctor doesn’t let Adric pilot the Tardis. And it’s also the reason why the Alzarian prodigy should never, ever, under any circumstances be allowed anywhere near anything even resembling a control console again as long as he lives. Which, at this stage of the game and according to accepted Whoniverse mythology, isn’t going to be all that much longer.  Having been persuaded (although cajoled and strong armed might be slightly more appropriate) by Tegan to try and do what the Doctor can’t, and take her home, whilst attempting to do so Adric is “kidnapped”  and a few moments later Tegan suffers the same fate.  Racing to find their friends, the Doctor and Nyssa follow the only clue the have and travel to Zaltys, a seemingly dead world, to rescue Adric and Tegan.  But like most things involving the Doctor, all isn’t what it seems to be, as threatened by a cataclysmic event, the inhabitants of the notoriously xenophobic world have taken precautionary measures to ensure the survival of their race, but in doing so, have inadvertently doomed themselves. And only the Doctor, his friends and a handful of rag-tag observers and a fortune hunter in the wrong place at the wrong time are all that stand between the inhabitants of Zaltys and an incredibly grizzly and horrific end.

Pitting the Tardis crew against the ancient spiritual enemies of the Timelords and another of the Doctor’s sworn foes, Zaltys, with all of its deliciously dark and devious characterisation and it’s marvellous twisting, turning plot feels like an old black and white Universal Horror movie transplanted – in much the same way that Victor Frankenstein did with brains – lock, stock and barrel into the Whoniverse. Featuring unexpected betrayal, strange cosmic undead, furry telepathic aliens, weird fish people and a world ending catastrophe that’s been dressed up and disguised as something that it isn’t to trade on the fears of a scared world, Zaltys is a full tilt, immersive tale that isn’t afraid to bump off, and do all manner of awful things, to its players in the name of good storytelling.  Lambasting the ridiculousness of Brexit, increasingly insular world politics and the way society is being changed, for the worse by the new millenniums blinkered, narrow minded global viewpoint, with Zaltys Matthew J. Elliot and the stellar cast have taken the old adage that all good art imitates life to heart and created something spectacular. And the fact that it’s packed full of alien horrors and biblical scale nastiness just adds even more drama, tension and excitement to the already excellent Zaltys. Monstrously good fun… Tim Cundle