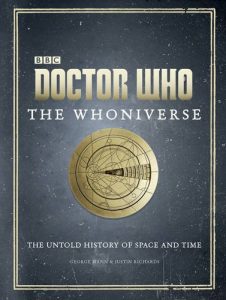 With Christmas just around the corner you can’t go far wrong if you buy The Whoniverse for either yourself or the Whovian in your life. It’s a wonderfully detailed book filled with beautiful artwork that chronicles the history of Earth and the Universe beyond according to the world of Doctor Who. From the Big Bang and the mysterious beings that inhabited the cosmos aeons before Humankind existed, to the far future where life in the universe is all but gone and all that remains is the Heat Death of creation, this bumper book contains everything that you’ll ever need to know about space and time according to the Whoniverse . Written in a fun but factual way that both kids and adults will love this (I would say stocking filler, although with a book this size,  you’d need stockings to fit an elephant) ideal Christmas gift.

It reminds me of a book that was released during the wilderness years of the 90’s called The Terrestrial Index only bigger and better. Sometimes I get a little envious of the merchandise that’s around these days, it’s staggering as all I had growing up was a TARDIS toffee tin and Tom Baker Underpants, oh and the odd target novel. Kids and the young at heart are spoilt for choice in today’s world and The Whoniverse is proof positive of that.

The one thing I would say though, is that while book is fantastic for youngsters and people who are new to the world of Doctor Who, it is, for those of us who have grown up with the show and have years of accumulated knowledge, maybe not as initially impressive. However, once you open it and start flicking through the pages you’ll be drawn in by the fabulous artwork and incredible narrative. Scaroth the Last of the Jagaroth, the Wirrin, Azal and the Futurekind are just a few of the names and fanastic faces, places and sights within it’s pages.  That’s Whomas sorted for this year then…Nath Rixon