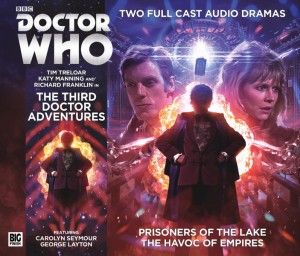 Doctor Who: The Third Doctor Adventures Volume One – Starring Katy Manning, Richard Franklin, Tim Treloar, Caroline Seymour, Robbie Stevens, John Banks, Helen Goldwyn, Lucy Briggs-Owen, Hywel Morgan, Joanna Bacon & George Layton & Written by Justin Richards & Andy Lane – 5xCD / Download (Big Finish Productions)
Like he is for so many others out there in the Whoniverse, the Third Doctor, is my Doctor. I didn’t grow up watching his exploits on television, I’m not that old, and nor is he the first Doctor that I remember, that particular accolade belongs to Tom Baker. No, I discovered the Third Doctor through my love of literature. Being a life-long prodigious reader, my parents found, relatively early in my life, that the best way to keep me quiet during family functions was to sit me in a corner with a book and leave me to my own devices. Not long after that, they recognised that if that book happened to be about The Doctor that would ensure that I was most definitely seen and not heard. Which is when my relationship with the Target novelizations of the Doctor’s adventures, and more importantly the Third Doctor, really began. Bar my family, it’s the longest, and one of the most rewarding, relationships I’ve ever had. So, bringing the Third Doctor back, recasting the role and “replacing” the dearly missed Jon Pertwee in a brand new set of stories was never going to be easy (at least not as far as I was concerned) and if it was going to be a successful endeavour, then everything would have to be right. No, everything would have to be more than just “right”. Everything would have to be as near perfect as possible. Plots, cast, characterisation, feel, tone and most importantly of all, the Third Doctor. They would all have to spot on. And you know what? They are.

Story-wise, both the tales on offer, ‘Prisoners of the Lake’ and ‘The Havoc of Empires’ plunge you straight back into the era of The Third Doctor’. The former, recreates the base under siege meets wayward alien threat storyline with ease after the discovery of a centuries old space –ship and its inhabitants necessitates the involvement of UNIT. During their investigation, The Doctor, Mike Yates and Jo stumble across the terrible truth about the “crew” of the ship and having done so, find themselves desperately trying to prevent the destruction of Earth. Thanks to its involving, slow burn plot that gradually builds tension and an underlying veracious excitement, and it’s water centric setting, it reminded me of ‘The Sea Devils’ ( which is one of my top five Third Doctor tales) , even though in actuality it has very little in common with it. Apart from the whole water thing obviously. The latter drama sends out heroes into the far future and deep space while supposedly on their way to turn of the century cricket match. It’s a wonderful ode to the halcyon days of The Doctor’s constant tinkering with the Tardis and his inability to control where or when his life, and his ship, will take him or his friends. Essentially a “murder” mystery and a tale of political and corporate sabotage and manipulation, ‘The Havoc of Empires’ sees the crew of the Tardis attempting to solve ‘whodunnit’ and by doing so, keep a galactic union, and peace in numerous solar systems, on track. It’s no small task and pushes each of them to their limits in this hugely enjoyable, snappily paced, character driven adventure (and which in a touching acknowledgment of the events of ‘The Spearhead from Space’ finally allows The Doctor to fully use his eyebrows), that incorporates an element or two of ‘The Curse of Peladon’ and ‘Frontier in Space’ while still remaining highly original.

The cast led by the always on form, and always fantastic, Katy Manning and Richard Franklin are exceptional and the writing is superb, flawlessly capturing the period and tone of the Third Doctor’s tenure. This brings us to the elephant in the room, the Third Doctor. If you’re expecting Tim Treloar, as admittedly I was before I heard ‘Prisoners of the Lake’, to indulge in a mirror image imitation of Jon Pertwee, then you’re going to be sadly disappointed. Instead, he channels the essence of the Third Doctor perfectly, bringing the character, rather than the actor who previously played him, back to life, and even though it takes a little while to get used to him in the role, by about halfway through ‘Prisoners…’, something happens. You begin believing in him and he becomes the Doctor. Don’t ask me what it is, don’t ask me to quantify or try to explain it, because I can’t. It just sort of… happens. I began to believe that he was, is and will continue to be The Third Doctor and I’m sure you will too. Welcome to the Tardis, Tim. Welcome back Doctor… Tim Mass Movement