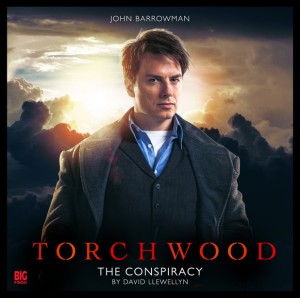 Torchwood: The Conspiracy – Starring John Barrowman, John Sessions, Sarah Ovens & Dan Bottomley & Written by David Llewellyn – CD / Download (Big Finish)
When most shows end, I don’t mourn their passing. More often than not, they’ve run their course, told all of the stories that they needed to tell and said everything that they wanted to say. Their race was run and they went at the right time before they became repetitive, old, boring and stale. That wasn’t the case with ‘Torchwood’ though, which was left in limbo after ‘Miracle Day’ as there were still a lot of stories left that needed to be told, as evidenced by the success of the radio plays that initially followed in the wake of the shows disappearance. However, with the last of the BBC productions appearing more than four years ago, and with only the occasional novel to buoy the collective spirits of fandom, any hope of ‘Torchwood’ being renewed and resurrected began to fade with every passing year. Until now. That’s right folks; Jack’s back and right from the word go its business as usual for ‘Torchwood’.

Everybody loves a good conspiracy, but some people go one step further, dig a little deeper and start sharing what they’ve “discovered” with the world. Former newsreader and journalist George Wilson is one such individual, becoming the poster boy for conspiracy theorists everywhere, as he shares the “truth” with his willing audience. George though, is unique. For unlike most of his associates, he seems to have stumbled across the real truth, or at least enough of it to peak Torchwood’s interest, and Jack determines to find out just what he knows and how he uncovered it. Nothing is ever straight forward or simple in the murky, shadow world of conspiracy, and Jack is soon waist deep in murder, fiction, deception and the global machinations of a sinister corporate cabal. And this time, he might just be too late to stop them.

Hearing Captain Jack again put an excrement eating grin a mile wide on my face, and the consummate ease with which John Barrowman slipped back into character reaffirmed my faith in the fact that it was the role he was born to play. He was put on this Earth to defend it from nefarious schemes of terrestrial and intergalactic origin, and knowing that he’s back doing what he does best, well, it was more than enough to make me pump my fist in the air with joy, exclaim yes and do a weird little jump thing while all of this was happening. Which was slightly embarrassing for me, as I was walking the dog at the time and I scared the life out of a little old lady and terrified my dog, jerked as he was off his feet and into the air by his collar. David Llewellyn’s break neck script is incredible, immediately submerging the listener in the story, and the supporting cast are magnificent, with the ever reliable John Sessions shining as the world weary, torch-bearer for the true believers, George Wilson. Torchwood is back, and it’s as good as it ever was, if not better. The twenty first century is where everything changes. And it all starts here… Tim Mass Movement