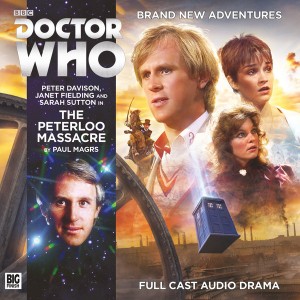 There was a time when historical adventure was part of the lifeblood of Doctor Who; as firmly engrained in its DNA as stories about mysterious aliens and strange, far off planets. But that was a long time ago, and after the shows direction changed during the Second Doctor’s first season, the “historical” became a thing of the past, a fondly remembered entry in the ever increasing annals of the Whoniverse; albeit one that would occasionally wake from its slumber, rearing its head solely to remind fandom that it still existed.  So, it was slightly surprising, and more than a little pleasing to be transported into a purely historical tale, one born from the classic days of yore that cares not a jot for the science fantasies and fictions that have (and rightly so) enamoured and entranced the Doctor’s audience.

The Peterloo Massacre is quite possibly Manchester’s darkest hour. Cutting a long, complex, horrific, but fascinating story short, it was a mass protest called by workers in order to try and better their wages, living conditions and place in society. Scared of the “rabble” finding strength in numbers, the yeomanry were despatched by the “higher ups” and those in charge to disrupt it, bring it to a close and maintain the status quo at all costs. The Yeomanry however, were a little over zealous in their efforts to break up proceedings, and in the ensuing melee hundreds of civilians were injured and fifteen people lost their lives. It was a bleak and devastating day in Lancastrian history, and it’s into this maelstrom that The Doctor, Tegan and Nyssa are plunged when the Tardis crash lands in Manchester in August, 1819 on the eve of this terrible day.

The events of the story play out almost exactly as they happened, but the emphasis of the drama, instead of dwelling too long on the gory detail, focuses on the handful of characters that the Doctor and his friends come into contact with in the run up to their involvement in The Peterloo Massacre, and how their lives are catastrophically changed by it. Rather than being active participants in the affair, The Doctor, Nyssa and Tegan serve more as witnesses and through their interaction and relationships with the people involved, become a collective guide to the grim and heart-rending episode. I don’t make any secret of the fact that I’m a huge fan of Paul Magrs work, both literary and audio,  and he has once again rewarded my eternal faith by delivering a story that, while adhering to the facts, is moving, absorbing, suffused with intricate and carefully constructed characterisation and motors along at a fair old clip. While it’s also particularly pleasing to see The Fifth Doctor, Nyssa and Tegan in a period drama, The Peterloo Massacre, through its setting and the way it develops its players, gives both the main and supporting cast a chance to really sink their teeth into the story and by doing so, allows them to serve up a bevy of sterling performances. And it makes its audience think. By showing us the price paid by our ancestors at the beginning of the movement for worker’s rights, The Peterloo Massacre reminds us how precious some of the things that we take for granted, such as unions, the welfare state, the NHS and education really are, and how it’s the civic duty of every man and woman to fight until their dying breath to ensure that they remain in place for generations to follow. Bravo… Tim Mass Movement