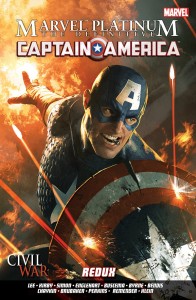 Of all the heroes in the Marvel Universe, no one epitomised what it meant to be truly heroic more than Captain America. He was the essence of honour, virtue, courage, devotion and selflessness and never asked for, nor expected reward.  He did what he did, that is standing up against the forces of darkness and defending those who weren’t able to defend themselves, simply because he could and because it was the right thing to do. For Cap, there were never any grey areas, there was right and there was wrong, and he always stood on the side of the former and fought against the latter. That’s what he did. That’s what he always did.

I realise that I’m talking about him in the past tense, and that’s because for me, Steve Rogers will always be Captain America and Captain America will always be Steve Rogers.  It was hard enough when Bucky took up the mantle and wielded the shield following his “death”, but when The Iron Nail stripped him of the super-serum that had kept him going it damn near broke my heart. And while Sam ‘The Falcon’ Wilson was the only logical, and also the perfect, person to then become Captain America when Steve was incapacitated, it didn’t matter to me; I couldn’t accept him as Cap for the same reason that I couldn’t accept Bucky as Cap. Because there’s only ever been, and ever will be, one man truly able to carry the shield, to bear the weight of what it means to wear that costume and embody the ideals that Captain America represents. And that man was, and is, Steve Rogers.

The Definitive Captain America Redux isn’t as you might expect, the history of his greatest victories and the stories of his most hard fought battles. Neither is it a collection of war fables or the tales that helped establish and form the legends and mythology that surround him. It’s the story of the man behind the mask, of Steve Rogers and the burden of the choices that he made while he wore the outfit. This is the warts and all history of a soldier who was determined to do the right thing no matter what it cost him. From the opening wartime Joe Simon and Jack Kirby snapshot in which he and Bucky foil Nazi spies and saboteurs through to Englehart and Buscema’s story of him abandoning his identity after losing his faith in the system that he had instilled his whole life in defending, and becoming the Nomad, these are the moments that defined Captain America. His refusal to accept the presidential nomination in Byrne and Stern’s Cap for President despite widespread public support and being almost guaranteed the position, enhances his saga, by illustrating his lack of desire for personal power or gain while reinforcing the idea that he was a man who was motivated by duty and not by self-interest.

Then there was the Civil War, the event that was either, depending on your point of view, Captain America’s finest, or most disastrous, hour. When the Super-Human Registration Act is implemented and sides are chosen, Steve Rogers and Tony Stark, for the first time since the Armour Wars find themselves on opposing teams. With Cap leading the resistance against what he sees as a tyrannical and cynical way to limit the freedoms and liberty of, and in doing so add to the danger faced constantly by, those who want nothing more than to do good, Iron Man views it as a way to regulate, train and engrain a sense of responsibility in those with powers. With Brian Michael Bendis and Howard Chaykin leading the charge and setting the scene for the fight in their opening salvo from the beginning of the war, the emphasis swiftly changes gear in Ed Brubaker’s, arguably the finest Captain America writer, Drums of War, in which Cap’s actions in the ongoing conflict, are seen not only from his perspective, but also from the perspectives of the people who know and love him most. It’s also the tale in which the Red Skull’s plans for his nemesis, and the tragedy that will ultimately befall him, begin to emerge. As I said, Brubaker is arguably one of the greatest architects of Captain America’s fate, and Drums captures both author and hero at the height of the their powers.

Eventually, as in all wars, the combatants need to meet, and in Christos Gage and Jeremy Haun’s Casualties of War, Steve and Tony unsuccessfully try to convince each other why they’re right. It’s a wonderful exploration of motivation that uses mutual and personal backstory and canon to explain their positions, while further defining one of them as a man of steadfast integrity and the other an intellectual driven more by his vision of future than the sanctity of humanity and the principles that should guide it. It’s a “final” engagement, as the next time they face other, Cap lies dead and Tony confesses all in the starkly (no pun intended, honest) moving and brutally unfeigned The Confession. And then, as all things do, Steve Rogers journey reaches its end in Super-Soldier No More!, a chapter in his life which proves that even the most heroic of men must ultimately meet their fate, and like Eliot suggested in The Hollow Men, it usually ends in a whimper and not in the gloriously over the top, and incredibly dramatic way one would expect for a warrior of such magnitude. It’s underplayed perfectly, which makes it all the more moving. A small ending for a big hero.  Which is exactly how it should be.

Weaving a fascinating tapestry of Steve Roger’s life, Captain America Redux looks as gorgeous, thanks to the mind boggling array of artistic talent involved, as it is engaging and captivating, the tales woven by the authors give their audience front row seats to his destiny as it unfolds scene by scene, on the stage set by fate and the Marvel Universe.  It’s a remarkable achievement, condensing everything that Cap was, and is, into such a relatively small book, but it does it fantastically well and with a sense of grace and style that serve as a near faultless reminder of why there will only ever be one Captain America and why there will only ever be one Steve Rogers. Semper Fi… Tim Mass Movement