Warning: preg_match() expects parameter 2 to be string, object given in /var/www/vip4/sites/vip6102689/httpd/htdocs/wp-includes/formatting.php on line 4866
 Doctor Who: The Missy Chronicles (BBC Books) - Mass Movement
x
Spread the love 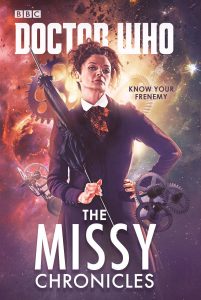 Unlike its 20th century counterpart, New Who has not been short of tv spin-offs.  Torchwood, The Sarah Jane Adventures and Class have all come and gone, with varying degrees of success – but what I’d really like to see is a spin-off for Missy.  One shown on BBC 1 in the Who off-season, with Michelle Gomez reprising her astonishing performance in the title role and all of the considerable spending power of the BBC behind it.  But while we wait for that wish to become reality, the latest book from the BBC, THE MISSY CHRONICLES, will do very nicely as a substitute.  Indeed, I can readily imagine the six stories in this book being used as a template for Missy Season 1.

The collection begins with the unfailingly excellent James Goss and the wonderfully titled ‘Dismemberment’, in which Missy discovers her name as she takes her revenge on the members of her favourite (evil) Gentleman’s Club.  The story itself is as exciting, fast paced and well written as we’ve come to expect from one of the stalwarts of Who prose, but what really makes it the perfect opener is the way in which is sets out its stall of unrelenting lack of moral scruples.  This, not the Valeyard, is the Doctor turned evil: charismatic, ingenuous, merciless and often very, very funny.  An ideal appetiser in many ways for the rest of the season.

Of course, having given our Time Lord anti-hero a new name, she now needs a companion.  Enter Yayani, a poor hard-done-to waif from a family who’ve ended up on the wrong side of Rassilon.  Sentenced to assist Missy in carrying out a dubious and almost certainly fatal job for the Gallifreyan High Command (much like the Fourth Doctor on Skaro in ‘Genesis of the Daleks’ but even more suicidal), Yayani soon shows herself to be a willing student and a quick learner, with unexpected and deadly consequences.  Again, it’s a beautifully written character study – of both female protagonists – with Cavan Scott providing enough action to keep the story moving, but also taking the time for a series of engaging discussions which subtly highlight the state of play back home during this first season of ‘The Missy Chronicles’.

It wouldn’t be a proper season of modern television without the obligatory slightly left-field episode – and who better to take an established formula and shape it into something strangely fantastic than Paul Magrs?  From the title – ‘Teddy Sparkles Must Die!’ – onwards this is a delight, as Magrs mashes together Doctor Who, 5 Children and It and Mary Poppins in a treasure trove of quotable lines, fabulous set pieces and sparklingly witty dialogue.  There’s an emotional core to the story too, and a solution which, in some ways, is actually crueller than anything Missy does in the first two stories.

You’d think that given such a strong opening trio of stories, the second half would struggle to maintain the momentum, but in fact the very next story,  Peter Anghelides’ ‘The Liar, the Glitch and the Warzone’, is the highspot of the collection, and the central story in our imaginary Missy season.  For a start, this is a proper, no holds barred time travel tale, as Missy flits from 14th century Venice to the modern day and back again, with deadly Gryphon warriors on her heels, and a TARDIS missing a vital component preventing her from making a permanent escape.  But it’s the gleeful brutality which is so…well, yes, gleeful!  Anghelides really nails the character as she plots to destroy an entire city and feed a time vortex the bodies of hundreds, thousands of its inhabitants.  There’s a ton of great if callous moments – the way she casually shoves a nun into the maelstrom, her lack of concern for the young boy she condemns to a terrible plague death, her response to being told you can’t kill a child (yes you can, the bodies are easier to hide!).  In this story, the author has created a wonderfully guilty pleasure which I can’t imagine anyone not enjoying. (oh, and the ending’s a doozy too!)

But you can’t have an entire season in which the evil gets ramped up and ramped up, though, before it eventually gets a bit dull, so it’s a relief in some ways to move onto Jac Rayner’s entry – a series of letters from Nardole to the Doctor as he becomes increasingly concerned by Missy’s prison requests, and the Doctor’s willingness to accede to them.  Of course, the Doctor knows best in the end, but it’s a smart, always funny and often thoughtful insight into a chastened and changed Missy – and another story to place women at the front of the narrative.

The collection – and our season – closes with Richard Dinnick’s ‘Alit in Underland’, which is a little unfortunate as, though there’s nothing actually wrong with it, it’s merely competent where the others sparkle, and relies over much on knowledge of other writer’s television episodes for its impact.  Still, it’s solidly written and has some good interplay between Missy and Master and is certainly no chore to read.  Placed in the middle of the collection it would be fine, but it does lack something as a closer.

All in all, then, this is a superior collection of stories starring what, to my mind, is the best new character to appear from 21st century Doctor Who.  One minor complaint though – why have the BBC not bothered to put the editor’s name on the cover?  Someone edited this, and they deserve to take some credit.