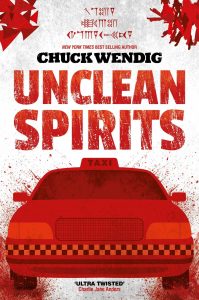 The gods and goddesses are real. A polytheistic pantheon–a tangle of gods and divine hierarchies–once kept the world at an arm’s length, warring with one another, using mankind’s belief and devotion to give them power. In this way, the world had balance: a grim and bloody balance, but a balance just the same. But a single god sought dominance and as Lucifer fell to Hell, the gods and goddesses fell to earth. And it’s here they remain seemingly eternal, masquerading as humans and managing only a fraction of the power they once had as gods. They fall to old patterns, collecting sycophants and worshippers in order to war against one another in the battle for the hearts of men. They bring with them demi-gods, and they bring with them their monstrous races–crass abnormalities created to serve the gods, who would do anything to reclaim the seat of true power.

Wendig has taken on the challenge of completely re-writing every rule of the fantasy genre. Everything about Unclean Spirits is harsh, brutal and straight to the point. The dialogue is short and sharp, sentences sometimes as short as two words but the descriptive work is absolutely blinding, although this is definitely not for the easily offended in any way it is packed with characters unlike any I’ve read before. The main character Cason Cole lost everything and ended up bound into service early in his life, but all that comes to an end and the tale unfolds from that point on. Many small plot points make this a stand out in trms of  recent reads for me but it’s the almost cinematic description and sequences complete with written sound effects that really cut through and ensures that Unclean Spirits towers above its competition. It’s  like Wending has recreated the best of the best  old school splatter-house, video nasty and gore filled horror movies in novel form. Essential. Gav