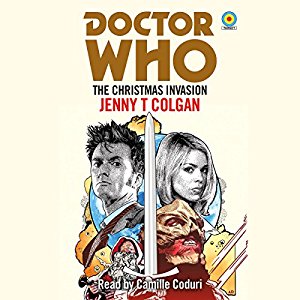 The new Doctor Who ‘Target’ books are of course big news. For fans of a certain age, like those who’ve gone on to make the show in the 21st century, the Target books were the only viable way of accessing some of the Classic stories when they were young – certainly that was the case for Jenny T Colgan. We know that because she touchingly tells us so in an author’s afterword in her brand spanking new adaptation of Russell T Davies’ The Christmas Invasion.

Target novelizations of Doctor Who stories were where a pre-net generation of hardcore fans got most of their information from, as well as their sense of having experienced stories that aired before they were born, before they caught the time travel bug, or on Saturdays when they happened to not be sitting in front of their TV screens.

The books varied in quality from the barest representation of what was on screen (We’re looking at you, Robots of Death), to extra-thick expansions of the storyline (Come in, Fury from the Deep, your word-count is up). They could be explorations in style (Donald Cotton), they could envelop you in a world of vivid description (Ian Marter), and they could add substantively to what was on the screen (Did you know the Cyberleader in The Moonbase had black handles? No, he didn’t on screen, but in Gerry Davies’ novelization, he did. And the Cybermen still had individual names too!).

Terrance Dicks was the go-to chronicler of Who stories though, and he churned out enough of them to carve himself a place in the hearts of a generation, and as a body of work, you could argue that through their wide availability, free from a single Saturday night time-slot, the Target books were probably responsible for making more kids into Doctor Who fans, and deepening their interest when they were hooked, than even the show itself.

So, yeah – the arrival of New Who ‘Target’ books is a huuuuuge deal.

The audiobook of The Christmas Invasion is a fantastic advert for the new range. If you haven’t bought it yet, and can – buy it. If you’ve bought it, and haven’t listened to it yet – listen. Look around you at the world we live in – you need a smile. The audiobook of The Christmas Invasion is what happens when you covert a smile into a soundwave and stick it in your ears.

Jenny T Colgan of course knows her stuff – she’s got form as a writer in the strange, forbidding world of the non-geek, and increasingly over the last handful of years, she’s brought her skills at characterisation and world-building to the world of Who too. What she’s done in the novelization of The Christmas Invasion is take her Target knowledge, and deliver the best of all possible worlds. She’s pulled a Terrance Dicks, in fact. What that means is that she’s delivered The Christmas Invasion faithfully for those who somehow, in the world of Netflix and iTunes and DVD and Blu-Ray sales, still haven’t seen David Tennant’s regeneration episode – but delivered it faithfully with occasional knobs of extra character-depth on, making it if anything a richer experience than the TV version.

Without wishing to in any way steal the pleasure of the listen from you, the extra details include the story of why the freshly-regenerated Tenth Doctor hates the Tower of London, a joyful additional meander about his meetings with an interstellar hitch-hiker, one extra line of dialogue about the British royal family that will make you spray your coffee over your screen if you hear it while at your desk, the reason for the Tenth Doctor’s ‘clever-specs,’ and the oft-vaunted idea that the Tenth Doctor got his cheeky chappie accent from hanging around with Rose Tyler. More than any of that though, Colgan allows us to peer inside the heads of characters, and shows us their fears, their insecurities, their determination to carry on even when their hearts are breaking, their hopes and loves and tears and braveries big and small.

Let’s be clear – The Christmas Invasion was originally a stroke of Russell T Davies genius, a trick he could pull on a nation of smarting Christopher Eccleston fans, because he knew what David Tennant could do, and most of us didn’t. His story was already focused on the ‘little people’ for the majority of its run-time. But in Colgan’s novelization, the character-moments have the time to breathe, to sink in, to make sense even as the adventure goes on around them. It’s a masterly expansion of a brilliantly structured original.

As such, characters like Rose and the new Doctor feel fuller and more real as they work out their post-regeneration relationship, but the real gems of characterisation are in the ordinary earthlings – Colgan shows us the admirable stoicism of Mickey Smith, the mum-smile of Jackie Tyler, who wants her girl to have the time of her life but fears every day she’s gone, the hopes of Daniel Llewelyn, leader of the Guinevere 1 project, and of Sally Jacobs, who’s one of the first to head to the roof when the Sycorax get their blood control voodoo on. It’s the gift of a skilled novelist to be able to take us into a number of minds, to show us real people, not just players in the drama of the moment, and in that, Colgan succeeds in spades.

Now, let’s talk about Camille Coduri, shall we?

Camille Coduri – and for that matter, Jackie Tyler too – is very underrated. Here, Coduri’s narration is brisk and bouncy, powering you through the listen without ever feeling rushed. Her Jackie, as you might expect (despite her having a life and a career and it being well over a decade since she recorded this story on TV) is note-perfect, but beyond that, she delivers a Rose that’s mostly Billie Piper, with an extra touch of strength and softness, and a Tenth Doctor almost as bouncy and bright and rentagob as the David Tennant version, meaning you always feel like you’re in a Doctor Who story – challenging indeed, given he spends all but the start, one brief Christmas tree-destroying moment, and the last ten minutes unconscious. She tackles the subsidiary characters gamely too, and succeeds in making you care for all the people you encounter. Coduri is never careless in her reading – she hits every mark, delivers every emotion, to give you an immersive experience of the story that will make you look at it with fresh eyes.

Bottom line, the new audiobook version of The Christmas Invasion is a triumph. An air-punching, bounce-around-the-place-and-kiss-a-stranger triumph, that adds warmth and depth and humanity to a script that was already audacious and funny and terrifying and brave by turns. You’re going to want to pick it up and feed it into your brain. And then, in all probability, you’re going to want to do it again. Tony Fyler