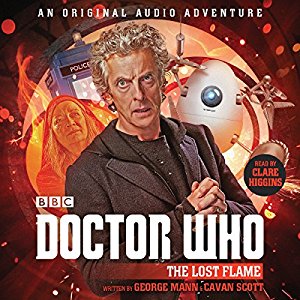 Mixed emotions today, as I finally get to the fourth and final installment of what has been a very entertaining series. Read by Clare Higgins this time or Ohila from The Sisterhood of Karn for those in the know. I’ve thoroughly enjoyed this mini-series and whilst I’m sad to see it go, it will be nice to get some answers. Hopefully.

The Doctor along with Alex and Brandon find themselves on Karn, home of the aforementioned sisterhood, a religious cult that first appeared in the 1976’s The Brain of Morbius. Following recent strange events on Earth the Doctor questions whether the Sisterhood and in particularly Ohila, could be involved. Unsatisfied the Doctor leaves for the planet Escalupia, a medical hub for Earth’s First Great and Bountiful Human Empire, where everybody seems reluctant to seek medication of any kind, unless it’s with the mysterious Angel. When Alex manages to get himself caught by the drones, we discover the true grisly purpose of the planet and the identity of the Angel.

The Lost Flame pulls this series together quite nicely, tying up some loose ends from previous installments, whilst answering many of the nagging issues. There are also some classic Who moments within, which all characters benefit from being a part of. Higgins narration is instantly likeable and her Doctor impression isn’t as offensive to the ears as some, which if you’ve been paying attention, has been a gripe of mine throughout this series. So it’s nice to hear the Doctor firmly in place for the final chapter. Kudos to George Mann and Scott Cavan, who’s storytelling has only enriched the Who universe and I’m looking forward to hearing whatever it is that they’ve got up their collective sleeves next… Chris Andrews