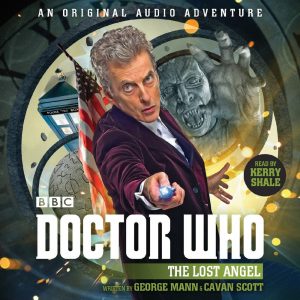 Introduced in 2007’s excellent episode Blink, Steven Moffat’s creepiest creation The Weeping Angels get an outing in this all new original story from George Mann and Cavan Scott. After successfully teaming up on Supremacy of the Cybermen, this audio book kicks off a new series of stories that Mann and Scott have written for the Twelfth Doctor.

We catch up with our favorite Timelord, who is currently travelling alone, in upstate New York, chasing strange energies that shouldn’t exist. He stumbles across brother and sister Brandon and Alex Yow. Alex is a photo journalist, trying to break her first big story. Unfortunately for her, while investigating a plan to develop the site of a homeless shelter, she has taken pictures of a strange statue that can move, a Weeping Angel. But why are the Angels here and are they acting alone, or is there something, or someone, controlling them? Brandon just wants to keep his sister out of mischief, but her pursuit of the truth behind the new development, leads her into her biggest adventure yet, one which will change her life forever. Scott and Mann have managed to capture the essence of Capaldi’s Doctor, with his wily wit, intermingled with his moody demeanor and of course plenty of eyebrow references which bodes incredibly well for the stories and adventures set to follow The Lost Angel.

The story read by Kerry Shale, has the feel of a typical Who episode. The characters are set up nicely, with fleeting appearances from the Doctor before we get to the nitty-gritty of the story that culminates in an ending that leaves you wanting more. However, Shale’s performance as the Doctor takes some getting used to. An otherwise excellent voice actor, Shale falls short when trying to pull off Capaldi’s Scottish brogue. This little gripe aside, The Lost Angel is an enjoyable start to a series which I’ll be following with more than a little interest. Chris Andrews