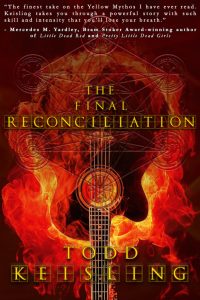 The Yellow Kings are a new band that’s streaking up the charts when groupie Camilla Bierce invites herself along for the ride. Their sound is new and unusual and is set to push heavy metal music to new heights. After the success of their debut EP they head back to the studio to record their first full-length album, one that’s sure to open new realms of creativity. With Camilla’s guidance (unasked for and mostly unwanted) the band record an album that will never be released after the tragedy that befell them when they play the full song listing at a surprise concert, a performance that leaves only one survivor.

As the band name would indicate, this is a tale based around the book by Robert W. Chambers and the mythos of H.P. Lovecraft, one that I fully enjoyed from the first word to the last. Todd Keisling has done a masterful job of weaving The Great Old Ones into his story and writes from the narrator’s point of view just as if he were a musician in the band. Being a former musician myself (though maybe not a very good one) this level of authenticity was important in keeping my attention. If it had rang false it would have killed the entire book. Todd nails it, however. While I foresaw much of what happened that little extra he put into the ending was perfect and made this yet another great title for Joe Mynhardt and crew at Crystal Lake. Jim Dodge