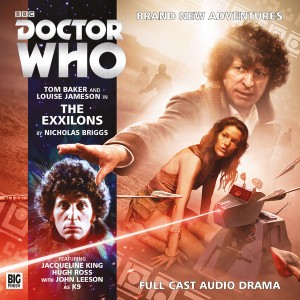 Doctor Who: The Exxilons – Starring Tom Baker, Louise Jameson, John Leeson, High Ross, Jacqueline King, Daisy Dunlop & Tim Treloar & Written by Nicholas Briggs – CD / Download (Big Finish Productions)
Much like the old adage about the presence of smoke and the inevitability of fire, I would have expected the return of the Exxilons, especially given the author, to have featured the armoured sons of Skaro, but you know what Shakespeare said about expectation, don’t you? That it was, and is, the root of all heartache, so I learned a long time ago to ignore its fevered tapping on my cranium and since then my ticker has been just fine. It’s a good job that I did as well, at least as far ‘The Exxilons’ is concerned, as the writer in question hasn’t followed the conventional path, instead venturing down the road favoured by Robert Frost, presenting a story about the Exxilons that features no Dalek’s whatsoever. Not one. And it’s all the better for it.

‘The Exxilons’ is a tale of exploitation, of one race hoodwinking another for their own purposes, using them until there’s nothing left in order to fulfil their own, over-riding agenda. Clever, sharp, concise and furiously plotted and paced, ‘The Exxilons’ draws on elements of the cosmic horror made famous by the likes of H.P. Lovecraft, Clark Ashton Smith and August Derelith with strange beacons, cosmic corridors and faith bound, “worshippers” doing the bidding of vast, all-consuming entities and gives them a twist of Science Fiction, while pondering the fallacy of dogma in all its forms, blind devotion and celebrates the spirit of independence and free-thinking. It’s perfect fodder for the Fourth Doctor, and the cast revel in their roles, from the scene chewing insanity provided by Hugh Ross as the villain of the piece, Gethal, to the wonderful eccentricity of Tom Baker’s Doctor and Louise Jameson and John Leeson’s measured, all-encompassing and perfected performances as Leela and K-9, ‘The Exxilons’ is everything a Fourth Doctor story should be, with a few tantalising extras thrown in for good measure. That’s the way to do it… Tim Mass Movement