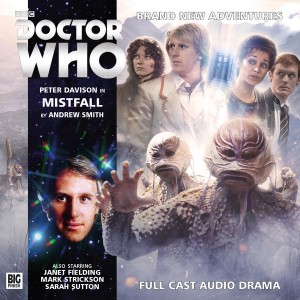 Doctor Who: Mistfall – Starring Peter Davison, Janet Fielding, Mark Strickson, Sarah Sutton, Nigel Carrington, Jemma Redgrave, Emily Woodard, Paul Panting & Matthew Carter & Written by Andrew Smith – 2xCD / Download (Big Finish Productions)
If it happened before, it can happen again and in the Whoniverse circumstance and fate often find themselves on roads they’ve travelled before; especially when The Doctor is involved. This time though, things are a little different, and with a little “help” from beyond the grave – thanks to Adric – the Tardis enters a CVE and finds itself in E-Space. As if that wasn’t improbable enough (the odds against it happening twice are nearly impossible) it also lands on Alazarius, the first world The Doctor found himself on the last time he passed through the barrier. Having been caught in this universe, and on Alazarius before, The Doctor is understandably more than a little cautious, something that Tegan, Nyssa and Turlough pick up on almost immediately, caution that soon turns to fear when he realises that it’s almost time for ‘Mistfall’.

Arriving centuries after his first visit, The Doctor and his companions stumble into a research mission from New Alzarius, a colony founded by the crew of the Starliner, who have returned to their former home in order to try and better understand their own origins, the planet’s indigenous life and in particular the Marsh Men. In the aftermath of ever increasing acts of sabotage which culminate in the destruction of the research base, The Doctor, Nyssa, Tegan, Turlough and the New Alzarians slowly begin to discover the truth about the creatures they previously regarded as monsters and not only the evolution of all life on the planet. And then there’s the saboteur. While a formative understanding slowly begins to develop between the former enemies, the viper in their midst strikes, threatening to destroy everyone and everything on Adric’s home world. Or at least, that’s what would happen if The Doctor and his companions weren’t there to save the day. But there are some things that even The Doctor can’t prevent happening, or foresee, and because the wrong person was in the wrong place at the wrong time, history, as far as The Doctor and E-Space are concerned, seems doomed to repeat itself.

‘Mistfall’ takes the crew of the Tardis in a refreshing and strange, new direction, plunging The Doctor back into a Universe he knows next to nothing about, a place in which the possibilities could, and should, be endless and I’m sure they’ll be explored at some future point. If not in this trilogy of adventures, then they almost certainly will in others. However, as an opening story, ‘Mistfall’ is an engaging, exciting and intelligent drama that has an almost instant air of familiarity due to its setting, which questions the impact and effects of colonisation, from the perspective of the colonists and the native species in a frantically paced plot that keeps building and building until it reaches its cliff-hanger crescendo. Welcome to E-Space… Tim Mass Movement