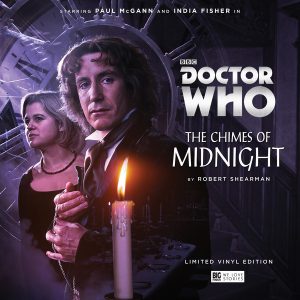 With the night’s drawing in and Christmas about to loom upon the horizon, this is the perfect time to light the fire, brew a pot of tea and settle down for an old-school murder mystery served with a big, fat dollop of timey-wimey shenanigans on the side. And who better to join us on our autumnal journey than the Eighth Doctor and Charley Pollard?

So let us begin. It’s 1906 and the incumbents of the TARDIS have materialised in a mysterious house. But why is it deserted on Christmas Eve?

Or is the house deserted? Because when a grandfather clock strikes at 10 o’clock, someone, apparently, is killed. Can the Doctor unmask the murderer or is something far more sinister at work?

So far, so Ghostlight…

Well – not completely Ghostlight as The Chimes of Midnight makes sense, and to that end, is not only cohesive, but is also a beautifully structured and paced tale. The first two parts of the story are, to all intents and purposes, a science fiction Who-dunit (see what I did there?), but an unsettling one at that – from the outset I felt as unnerved as I had when I was 9 years old and experiencing Sapphire and Steel for the first time, instinctively knowing that something was not quite right, but not immediately able to put my finger on what that ‘something’ may be. Actually, I’m a very quick study (and modest, to boot), so even though I had an idea of what might be happening reasonably early on, by the time the Doctor and Charley realise that something’s afoot it’s far too late for them to do anything about it.

And The Chimes of Midnight isn’t just a well-penned tale. Shearman has written for a small cast who give the story an intimate, something-is-breathing-on-the-back-of-your-neck feeling from the start. Every character is beautifully written and wonderfully performed, and Paul McGann and India Fisher (who have always enjoyed wonderful chemistry) sparkle here. In fact, the whole cast shine, and the story’s central conceit – that of a living house that has been animated by a temporal paradox – works extremely well without becoming complicated or confusing (I’m looking at you again Ghostlight). Oh – and if you’re not sure about this because you’re not up to speed with the whole Eighth Doctor / Charley backstory, don’t worry – this can still be enjoyed by the casual listener.

I’d give this a thumbs up, but have just had my writing hand put in plaster. So pass me a couple of anti-inflammatories and that pot of tea, because I’m going to listen to this again… Bex Ferriday