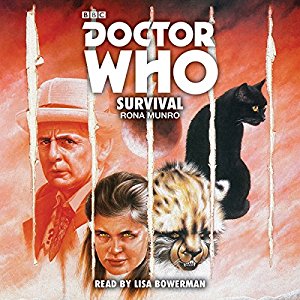 The final outing for the seventh doctor, Sylvester McCoy was something of a bitter sweet event. It was clear that the die had been cast and the Doctor’s days at the BBC were numbered. Ratings were dwindling and The Doctor was considered old hat. It wasn’t all doom and gloom though as Survival, the latest unabridged novelization from Target Books, proves. It embodies all the good things about Doctor Who and is a fitting end to McCoy’s reign.

The Doctor brings Ace home to Perivale for the summer holidays but, as is often the case, something is wrong. The streets are eerily calm and Ace’s old gang have disappeared one by one, without trace and even more puzzlingly the neighborhood’s pets are getting killed all except one mysterious black cat, who seems to be linked to the disappearances.  When Ace and later the Doctor himself are mysteriously transported to a distant planet, bathed in a crimson sky, the Doctor is once again, pitted against a dangerous old enemy.

Some of my favourite episodes start off when in a familiar setting, all seems well, with just a hint of the terrible things to come and Survival very much fits into that category. Rona Munro’s writing perfectly capturing the essence of a classic Doctor Who episode. Indeed, Munro holds the title of being the only writer to have written for the show in both its classic and modern era, having returned in 2017 for The Eaters Of Light. The BBC have again used one of the serials characters to narrate the story, Lisa Bowerman who played Karra, who does a fine job voicing the various characters including McCoy’s quirky Doctor. Another fine edition to this already great range and a pivotal moment in Who history that’s ready to nestle itself into your collection……Chris Andrews