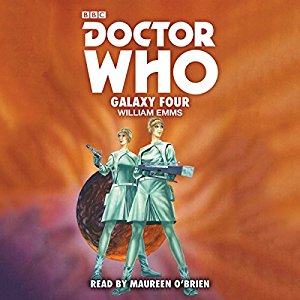 One of the famous first doctor missing serials, first televised in 1965 and which is still largely missing, even now. To date only the episode Air Lock has been discovered and that’s missing the last 30 seconds. Luckily for us, Target Books published the novelization back in 1986 and that’s what we have here in this 4CD set. The complete and unabridged version read by Maureen O’ Brien, who played Vicki, in these missing episodes. The set, compromising of 4 episodes Four Hundred Dawns, Trap of Steel, Air Lock, and The Exploding Planet, is a typical Doctor Who romp and contains all the elements you would want to hear in the Doctor’s adventures.

The Doctor, accompanied by Vicki and Steven, have landed on an unknown barren planet, the inhabitants of which are made up of a race beautiful cloned female humanoids known as The Drahvins and their repulsive horned reptilian counterparts, The Rills. Following a skirmish in space, both parties have landed on the planet and are engaged in a desperate struggle to survive. The Drahvins, with their authoritarian leader Maaga ask the Doctor for assistance to leave the planet, but when the Doctor learns that the planet will explode in two days’ time, all is not what it seems.

An exciting and thoroughly enjoyable listen, massive credit must go to Maureen O’ Brien, whose narration and voice work, as well as lending extra credence, is second to none. She brings bags of enthusiasm to to the story. A number of times, Doctor Who audio books, however enjoyable,  have left a bad taste in the mouth due to a badly executed accent or lack of enthusiasm, but O’ Brien nails this on every level. This series really has gone from strength to strength, turning one of the more average Who serials into an absolute  must have and being as this is the only complete version of the story, makes it absolutely vital… Chris Andrews