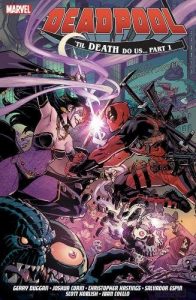 Poor old Wade.  He should run whoever told him that marriage was easy through with his katana’s before decapitating them and using their head as a football in some sort of sport related therapy. Marriage is never easy at the best of times, but when your wife, Shiklah, is a demon ruler of a monster kingdom that’s situated under New York and has an incredibly liberal attitude toward monogamy, it’s destined to be one of those relationships that need a little extra work if everything is going to, sort of, stay on track.  Which Wade, despite his multitude of other commitments as Deadpool, does his crazy best to ensure he does, but in Til Death Do Us… circumstance throws New Yorkers and monsters together in a no-win situation and Shikla does the only thing that she feels she can to respond. She declares war on humanity. A war that Wade finds himself on the opposite side of to his better half and a war that he can only be won by dragging his wife’s former suitor into the conflict and possibly losing Shiklah forever in the process. You know what they say though, lucky in war, lousy at love (or something along those lines anyway), and sure as bullets kill bad guys, that’s what happens to Wade as he discovers that the only way to save the world is by losing almost everything in it that matters to him. Yeah, sometimes it really does suck to do the right thing and it most of the time it sucks even harder to be Deadpool.

Duggan, Corin and Hastings must have had many secretive late night get togethers involving copious amounts of discussion, planning and maybe the odd drink or two in order to formulate and co-ordinate all of the wonderful finer details of Til Death Do Us. Either that, or they nearly burned the internet down with a never ending succession of emails being fired off at, and to, each other, because the story contained within its pages, that is the plot, characterisation, interaction and dialogue, flows as easily as the whiskey did at my Uncle’s wake. And as said wake started the is the period of time that I “laughingly” refer to as my lost week, it was flowing freely and in copious measure.  Coupled with the dazzling artwork of Messer’s  Espin, Koblish and Coello, ‘Til Death… is a immersive, funny and oddly tragic slice of Deadpool mythology and history that no self-respecting devotee of the merc with a mouth can afford to be without. Grab your hankies, polish your 45’s and raise a glass to the man who sacrificed his happiness to save the world. Here’s to Wade… Tim Cundle