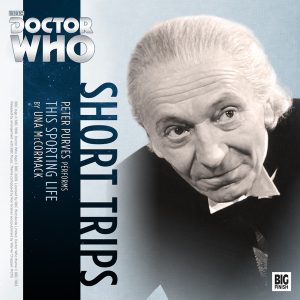 Having listened to a few of the Short Trips series of shorter adventures, I have to say that I am enjoying them immensely. Not only do they feel like reminders of a gentler time, but there is a definite warmth to them. Much of this warmth is thanks to the narrators, often one of the show’s original companions (in this instance, none other than Peter Purves), who imbue each story with a real sense of joy. Oh, and they are easily digested in one go while on the bus on the way to work!

This latest story (and very timely it is, as this review is being written during Wales’ first match with Slovakia in Euro 2016) involves the first Doctor and companions Steven and Dodo. Yes, it’s an audio adventure, but it still manages to capture those grainy, monochrome days of early Who perfectly. And yes, there are aliens, but the story is entirely Earth-based. Listen to it and be transported to a British front room in the mid-sixties.

Enough of the nostalgia, and more about the story. The problem with a short adventure is that writing too much will give everything away. So instead I’ll leave you with these teasers: what is Stein’s Radiation? Why has the World Cup been stolen? And when does stealing the World Cup become a show of kindness rather than a crime?

I love Peter Purves’ take on Dodo. Somehow, he manages to sound like an impatient Alan Bennett, standing at the back of an endless queue for tea cosies. Yet it works, and as one of the lesser known companions of the Hartnell era, it’s great to see Dodo playing such a central role in this story. His portrayal of the First Doctor certainly grew on me too – sounding at first like Professor Yaffle (remember him, middle-aged Bagpuss fans?), before very much becoming the more relaxed, charming and funny soul he was by the time companions Steven and Dodo joined him.

In all then, definitely worth the couple of quid this costs to download, this a nice journey back in time for us older fans, a very good audio introduction to the First Doctor for all of those fans of ‘Nu Who’, and perfect when trapped on the Number 1 bus from Splott! Bex Ferriday