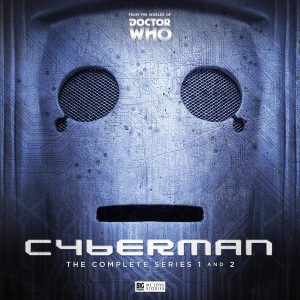 Re-released in a collected volume as part of their own 50th Anniversary, Big Finish’s Cyberman series presents humanity in the gravest of danger and locked in an interstellar conflict with its own android creations.

Series 1 sees the incumbent president of Earth refusing the more uncomfortable options, and an insidious conspiracy manoeuvring military hero Admiral Karen Brett into position. Meanwhile, Paul Hunt provides a friendlier face and the chance to turn the tide with his Scorpius project, but at a terrible cost, as the long dormant Cybermen have their own agenda.

How does it turn out?  Not too well as it happens; set six months later, series 2 shows us the horror of Earth under Cyber control.

In television land, no matter how desperate a situation becomes, as soon as the Doctor and his merry band of companions turns up, the audience know that they can relax, safe in the knowledge that whatever happens, everything will turn out okay in the end.  There is no Doctor here though, and the story is all the more terrifying for it as we see the devastating effect cyber control has on the human race.

I’ve always liked the first incarnation of the Cybermen, with those massive headlights perched precariously atop their silver balaclavas, so I was delighted that the Cybermen presented here are drawn from their earliest stories, driven by an eerie Cyber-Planner and using stealthy tactics. Brilliantly, the musical score only serves to reinforce this, making for a generally unnerving soundtrack to both series.

This box set comprises eight hour-long plays which, though lengthy, I heartily recommend. This is proper, grown-up Doctor Who (so nothing like Torchwood). It looks at issues of politics and power, and without the Doctor to clean up the mess, there are no easy answers and real consequences. The cast are fantastic, and together they have made an epic story that is both chilling and brilliant. Bex Ferriday