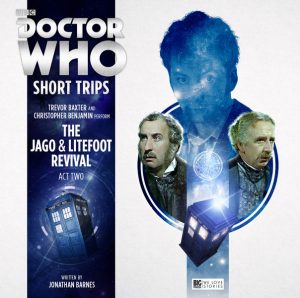 Ladies and gentlemen, if you would care to resume your seats, the second act of the latest death defying escapade featuring those most dauntless and intrepid supernatural and scientific sleuths, Messer’s Jago and Litefoot, is about begin.  When last we left our heroes, they were both, even though geographically separated by the mountains and nations of the European mainland, fleeing the tendrils of extra-dimensional alien horrors in the company of the Doctor. Well, two different Doctors to be precise, but given their circumstances, Henry and George were in the safest company and the most capable pair (Or should that be pairs? It’s so difficult to tell whether to him in the singular or plural form in these multiple Doctor stories) of hands.  Pursued by monstrosities from a place where contractual law is vastly different than it is on Earth and who are determined to cash in an inadvertent bargain made by Jago and have been accidentally summoned by Litefoot; the sometime companions of the Doctor end up battling for their lives on that most noted and familiar, to Henry at least, of places, the stage.  And in a show that plays to a packed house, their survival depends entirely upon their ability to put on a good show. Because anything less than a crowd pleasing performance is almost certainly going to end with their curtain call.

I didn’t think it was possible to up the ante on Act One, but once again Jonathan Barnes, Trevor Baxter and Christopher Benjamin have proved me wrong and have achieved what I believed to be impossible. Featuring, as you’d expect given the Doctors involved, a lot of running, the plot of Act Two unfolds at a similar pace to the characters’ chosen method of escape from the creatures hunting them. And it is, as you’ve probably guessed, rather rapid and more than a little exciting, as all of the pieces of the puzzle left dangling in the air by the previous chapter come together in an orderly and incredibly enjoyable fashion. The dashing, if somewhat slightly older, duo are once again played with verve, vim and gusto by Christopher Benjamin and Trevor Baxter and Jonathan Barnes script is on point throughout, serving up a razor sharp story that combines the very best  elements of “Classic” and “New” Who. Oh, and Act Two also features a cameo from the fabulous Ellie Higson, who after remarking that she has “only the smallest role”, I fear I must remind that there are no such thing as “small roles”, only small players and characters, and Ellie is neither of those things, as her presence always provides balance and ballast to George and Henry’s adventures. Huzzah!  Tim Cundle