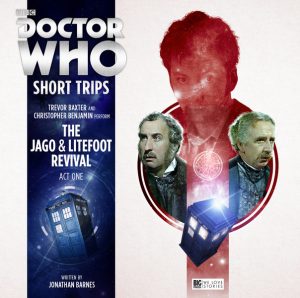 Well, I’ll be jiggered! Jago and Litefoot? The Tenth Doctor? A surprising, and most welcome, ally for the foremost theatrical impresario in all of London? That’s right ladies and gentlemen, the gang’s all here and it’s all happening in Jonathan Barnes The Jago & Litefoot Revival: Act One. So roll up, roll up, come one, come all and get yourself a ring side seat for the greatest show to have ever graced this, or any other town.  By gad, the Victorian vigilantes and prestigious prosecutors of the infernal and mysterious are back – with a little Timelord help -to set the world to rights, again.

Having found themselves at something of a loose end as far as their caseload is concerned; George and Henry, in The Jago & Litefoot Revival: Act One present the opening chapter of their most recent adventure, one that set them back on the path of their intrepid crusade against the forces of darkness. Parted by the whims of fate, with Litefoot traveling to Greece to visit an old friend and Jago attempting to revitalise his theatre’s fortunes and deal with an apparent arachnid infestation, the daring duo find that no matter what they do, they’re never far away from the affairs of the Doctor. And, that said, George falls victim to an enchanted musical instrument and Henry finds himself facing, and having to save his establishment from, a murderous monstrosity that is most definitely not of this Earth.  Fear not though gentle reader, for even though they’re parted and thus not at their best, Messer’s Jago and Litefoot have friends from strange places looking out for their best interests. One friend in particular, who, in their moment of need, rushes to aid them in their individual plights.

While it isn’t immediately apparent how the mysteries that George and Henry have become inveigled in are connected, by the time this most satisfying and entertaining chapter closes with a nail biting cliff-hanger, I felt sure that all will most definitely become apparent in the next act. Jago and Litefoot are, without a shadow of a doubt, the singularly most engaging partnership in the annals of Steampunk fiction, a position attained thanks in no small part to the always remarkable performances of their alter ego’s Trevor Baxter and Christopher Benjamin, and the involvement of the modern incarnation of the Doctor in their escapades snaps the excitement dial off when it reaches ten, and forces everything, characters, story, dialogue and all, up to eleven. Jonathan Barnes has, as he is almost always want to do, crafted a wondrous tale of fantastical adventure that, on the strength of this initial chapter, looks set to become one of George and Henry’s finest moments. Bravo gentlemen, bravo… Tim Cundle