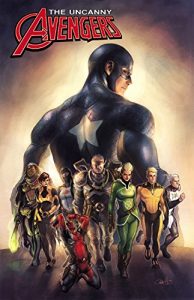 As the rot and the fallout from Civil War II continue to spread unchecked through the Marvel Universe, they finally reach, envelope and devastate the Avengers Unity squad.  After discovering that Cable and Rogue set off in search of a cure for the M-Pox with Toad and Sebastian Shaw in tow, and finding that Deadpool was covering for and protecting them, Hydra’s best kept secret Steve Rogers disbands his unlikely team of heroes and walks away from the “mess” that he was originally responsible for creating. But once an Avenger, always an Avenger and you can’t put a good superhero down that easily. So when Brother Voodoo calls on his team mates after he’s betrayed by his sibling and determines that the Hand are planning on raising the Hulk from the dead in order to use the big green wrecking machine as a weapon of mass destruction, the Unity squad assemble and set out to stop the undead ninjas unleashing Hulk powered hell on the world.  And in their tried, tested and true gung-ho, caution thrown to the wind, no mercy or quarter given and none expected in return style, the rag-tag Avengers misfits get to do what they do best. They bring the pain to the bad guys in an unmitigated orgy of righteous violence and save everyone and everything on Mother Earth from a threat that most of the unhappy masses never knew existed.

On the surface, Uncanny Avengers Unity: Civil War II, seems like a pretty straight forward, hold the line whatever the cost, superhero slug fest, but believe me, there’s so much more to this book than meets the eye. The character development is incredible, especially the personal journeys that Deadpool, Rogue and Brother Voodoo undertake, and the moments that Wade shares with Clint Barton and the lengths he’s willing to go to, and the sacrifices he’s prepared to make to save him reveal that the strength of Deadpool’s heart and convictions far outweigh any of his personal flaws. In fact, even though it bears the Avengers name, Gerry Duggan’s story is really all about Deadpool as it uses him as the conduit around which its plots and gradually revealed secrets tragically unravel.  A superb example of four colour plot construction and character development, that thanks to the art of Ryan Stegman and Pepe Larraz is as breathtakingly beautiful as it’s plot is intoxicating and engaging, Uncanny Avengers Unity: Civil War II is a must have addition to everyone’s pull list. Uncanny Avengers Unity… Assemble! Tim Cundle