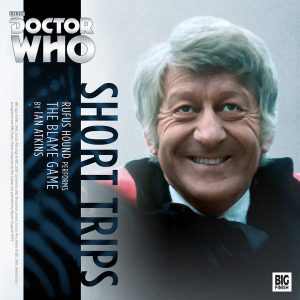 Just another day in downtown UNIT HQ. The Doctor has been confined to Earth by his own people, and, as classic DW fans know only too well, will do just about anything to get his TARDIS working again. But just how far will he go in order to regain his freedom? Far enough to throw his lot in with a fellow Timelord who can’t be trusted? Absolutely!

But wait! There’s more! In The Blame Game, it’s not just the Doctor who is impatient to travel all of time and space. His companion is ready to explode with curiosity and wants to see more than the confines of her laboratory…

It was a shame that Liz Shaw never got to travel in the TARDIS in her televised adventures. But sing ‘Hallelujah’ and praise the Timelords: this story goes some way towards redressing this. Liz Shaw is a scientist – a qualified doctor, no less. She doesn’t scream (much), never simpers, would probably punch you if you ask her to make you a cup of tea, and has that wonderful stern-but-affectionate way of holding the Doctor to account. But despite her strong sense of right and wrong and propensity for following rules, in this story it’s not just the Doctor who is prepared to do anything to spread his wings. And this could well be one of the best moves she’s made.

Big Finish: with these Short Trips, you are really spoiling us. Not only does Liz Shaw finally get to travel in (a) TARDIS, but my bus journey to work is now much improved (though the bus still smells of wet dog). And as with the other stories in this series of classic Doctor adventures, you’ve done the right thing by asking someone who properly, genuinely loves Doctor Who to narrate.  Here, Rufus Hound is clearly having great fun, and when your audience can tell that the reader is loving the story, then I’d say you’ve pretty much cracked it! Bex Ferriday