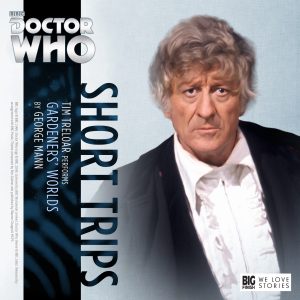 George Mann and I, it would seem, share a similar theory about the cataclysm that will eventually destroy humanity. That is, that it won’t be caused by a global superpower teetering on the blink of collapse that decides to take everyone with it, but rather that it will emanate from the most unexpected, and least suspected, of places.  And in Gardeners’ Worlds, that extinction level event that threatens to bring all of time and space to a premature halt is located in a small, rural, English village whose only previous claim to fame was that a meteor fell on it a century before and destroyed the church steeple. But the peace of this idyllic country retreat is shattered by the sudden disappearances, and appearances, of the strangest things which peaks UNIT’s curiosity enough to send a squad of soldiers, Mike Yates, Jo Grant and the Doctor to investigate.  What they discover is a mystery far more bizarre and dangerous than they could ever have imagined, as they become entangled in an overgrown web of alternate histories, parallel worlds, incredibly advanced alien technology, chronal parasites and a housewife whose green fingers and predilection for talking to her plants might just be the trigger mechanism that started the end times. After all, from the smallest of roses the mightiest of apocalypses grow.

If Alan Bennet had abandoned his life’s work, then formed a writing partnership with John Wyndham and they had both dedicated themselves to crafting a Doctor Who story that lay somewhere between The Spearhead from Space and The Daemons, I suspect it would follow a similar gentle, yet eerily disturbing path to Gardener’s Worlds. Combining multiverse theory and a story about the gradual decimation of mankind by extraordinary other worldly forces, Gardener’s World is an adept, uncanny and fascinating tale that could easily have been a part of the Saturday tea time BBC line-up in the early seventies. It feels like a classic Third Doctor story and Tim Treloar’s increasingly uncanny and frighteningly accurate portrayal of the Doctor in question is the icing on the period cake that is George Mann’s story. I’ll never look at flowers the same way again… Tim Cundle