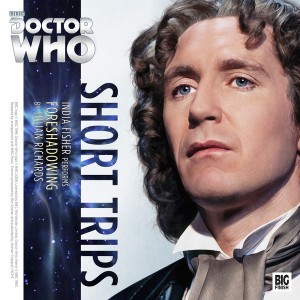 Doctor Who: Short Trips: Foreshadowing – Written by Julian Richards & Narrated by India Fisher – Download (Big Finish)
Defined as a literary device or method of giving advance warning of things to come or future occurrences, ‘Foreshadowing’ is quite possibly the most appropriate title for a story ever. And when I say ever, I really mean it; with a capital E. Sorry, where was I? Oh yes, that’s right ‘Foreshadowing’, the story that seemingly appeared from nowhere and leapt straight into my all-time top ten of Doctor related short stories in less time than it takes to suffer a single episode of one of those insipid soap operas that seem to enrapture the masses.

‘Foreshadowing’ finds the Doctor and Charley in military custody being questioned by a young Lieutenant after they were caught trespassing on government property, and what’s more, standing over a soldier who had been mysteriously transformed from a man in his mid-thirties into a five year old boy. It is, as Charley might say, jolly baffling, as the pursuit of a time parasite brings The Doctor into contact with one of his oldest friends (who doesn’t know him yet); and the day, and probably all of humanity and earth itself is saved, quite literally, by a packet of biscuits. Veering left, then right, then doubling back, springing forward and finishing with a well-deserved triumphant little hop having led its audience on a merry little dance, ‘Foreshadowing’ is full of wonderfully original twists and turns and familiar names and faces. And it is absolutely brilliant. Flawlessly written and executed, bristling with mischief and humour (and the occasional in joke) and magnificently narrated and performed by India Fisher, Julian Richards’ endearing tale stays with you long after the final notes of the closing theme have faded out. Encore, encore… Tim Mass Movement