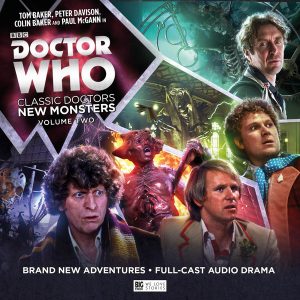 I can scarcely believe that it has been a year since we were treated to Classic Doctors New Monsters Volume 1. It’s been a bloody long wait, but praise Rassilon and say ‘Huzzah’, as Volume 2 has arrived! Unlike many Big Finish’s audio boxsets, there was no real theme or arc to the stories that comprised volume 1, and volume 2 generally continues that approach, although the first and last episodes are linked in that we’re treated to two Vashta Nerada stories, encountering two separate Doctors.

There are some pretty heavy-going audio adventures featuring various incarnations of the Doctor, so part of what made the first volume of Classic Doctors New Monsters (which I shall now refer to as CDNM because it’s an annoyingly long title to keep typing) so charming was that the stories were pretty light-hearted in tone, and it’s to their credit that Big Finish hasn’t tampered with the formula. Here’s your synopsis of each story to give you a flavour of what to expect. Damn, but I’m good to you!

Night of the Vashta Nerada, by John Dorney

The Vashta Nerada originally appeared on-screen in Tenth Doctor two-parter, Silence in the Library/Forest of the Dead, and despite my not being a fan of the Tennant era (too much showboating and far too smug and shouty to be a decent Doctor), I have to say that I did enjoy the introduction of these sinister, chilling, and, dare I say it, ‘Hinchcliffian’ monsters. To team them up with the Fourth Doctor is pretty much this fan girl’s dream come true….though having said that, I did wonder how these particularly visual monsters, would fare in an audio story.

Pretty well, it turns out. I could almost feel Tom Baker’s toothy grin and boggly eyes, both in Tom Baker’s performance and in Dorney’s writing. It may be a simple enough story on paper – a traditional ‘base under siege’ tale featuring a group of people who have been employed to set up an amusement world – but it also provides the listener with the chance to learn a bit more about the Vashta Nerada as we’re granted a peek into what makes them tick. Importantly, it also establishes that the Doctor has never really encountered anything like this before. You see, as much as I enjoyed the first volume of Classic Doctors, New Monsters, it niggled me that none of the stories felt like first meetings. Be it the Weeping Angels, the Judoon or the Sycorax – the Doctor seemed to be very familiar with them already.

Empire of the Racnoss, by Scott Handcock

Now this is exactly what I’m looking for from a CDNM story: a tale that adds to the mythos of both Doctor Who and the Racnoss, but manages to have A LOT of fun while doing it. Here, the Fifth Doctor, along with the audience, are thrown into the midst of a family feud from within Racnoss society, where we’re given insight into how their social order functions without the tedious need to fill in gaps in their backstory: something I for one appreciate, as it leaves room for a proper old-fashioned romp. And as, if this weren’t good news enough, as part of this week’s BOGOF offer, Handcock has also thrown in some other Time Lords without letting the story become dull. Don’t get me wrong – The Meddling Monk is a right hoot and a half, but my heart sinks when other Time Lords appear. They look ridiculous, they remind me of the pompous but incompetent jobsworths I have to work with, and they probably listen to Radio 2 as well. Adjoa Andoh as the Racnoss Empress is just fantastic, and 100% committed to a role that isn’t an easy one to play – though it does help immensely that Handcock’s script is lovingly faithful to The Runaway Bride and captures the character perfectly.

The Carrionite Curse by Simon Guerrier

Remember in The Shakespeare Code how the Carrionites used language as a weapon?  Well, should you come up against these crazed, crow like crones and intend to fight fire with fire, then you’re going to need a pretty verbose incarnation of the Doctor to be able to do battle. They’re all a pretty wordy bunch, but one regeneration stands out more than any other as the Director of Diction, the Troubadour of Text and the Knave of the Narrative…who you gonna call? The Sixth Doctor!

It’s the 1980s and the Doctor finds himself in a town that appears to be conducting witch trials. Naturally, he has to intervene before the townsfolk start burning people at the stake, and it’s here that his compassion for others shines through – all the more so when he lets people down. And that’s nice, because we often think of Six as not being a particularly compassionate sort of character. He’s funny too – listen out for one specific scene that allows Colin Baker to cut loose brilliantly, and which had me laughing like an idiot (on the bus to work, so Lord alone knows what my fellow commuters thought).

Several concepts underpin the action in this story: life and death, magic versus science, old curses and echoes from the future, different kinds of power…oh, and not only is there foreshadowing to The Shakespeare Code, but also to Trial of a Timelord, adding more significance and emotional depth to this outing than a standard “defeat the monster” adventure. One thing worries me though: with the real world currently hurtling backwards in time, I wonder whether this story is eerily prescient of what’s to come. I’m a southpaw too, so I’ll be burnt at the stake before you can say ‘can anyone smell bacon cooking?’

Day of the Vashta Nerada by Matt Fitton

Jacqueline Pearce! That’s all you need to know, and enough, I reckon, to get you to go out and buy this. See ya!

So, you’re still not convinced, eh? Okay. So while Night of the Vashta Nerada was moderately scary, this follow-up tale is absolutely fricking terrifying. I would suggest that there’s no better sci-fi horror setting than that of the claustrophobic confines of a space station with hard vacuum just outside, doors to be breached or blocked, and vulnerable life support systems. Perfect hunting grounds for Geigeresque Aliens…or something like, for example, the (genetically modified) Vashta Nerada. And, as is often the case, in this story, they’re only one of the Doctor’s problems. So for the most part this is a suspense/disaster story requiring the Eighth Doctor to muster all his powers of ingenuity to keep people alive, door by door and room by room. Simple, claustrophobic, terrifying…and did I mention Jacqueline Pearce is in it?

That’s your lot then. To wrap this rather wordy review up, I loved Volume 1, but think CDNM has really hit its stride with Volume 2. Now, that may be because it features some of my favourite regenerations of the Doctor, it may be because it features one of my favourite monsters (twice!), so it may be that I’m being subjective. But there is some gorgeous subtleness of tone and theme here that really appeals to me, and bridges the gap between old and new beautifully. I love that aforementioned foreshadowing to The Shakespeare Code and Trial of a Timelord, and adore the juxtaposition between looking back to the classic era and forward to the new using the spectre of the Time War, implicitly or explicitly, as a bridge between the 2 eras. It’s a clever way of making this collection more than just a disparate collection of stories, and as a boxed set, it’s well worth your time. Bex Ferriday