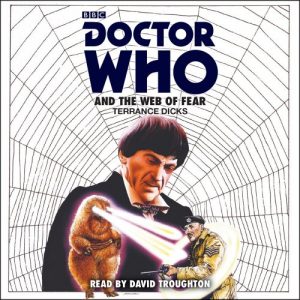 For forty years a Yeti stood in a London museum, nothing more than a moth-eaten curiosity, gathering dust. That is until one day, without warning, it awoke and savagely murdered its ‘owner’, Professor Travers. At the same time, patches of mist started to appear across central London, and anyone who lingered in the mist died, their faces smothered in cobwebs. Cobwebs which slowly seeped downwards, penetrating the Underground system.

When the Second Doctor and companions Jamie and Victoria arrived, they found hordes of Yeti roaming the misty streets and cobwebbed tunnels, killing everyone in their path. London had been gripped in a…wait for it…WEB OF FEAR!

In recent years The Web of Fear has become a prominent story, brought about by the discovery of this previously ‘lost’ adventure in 2013 and the return of the Great Intelligence to the televised series around the same time. It has also, apparently, spawned an ongoing spinoff series of Lethbridge-Stewart novels, none of which I have read nor seen. It woulds seem that there’s a fair amount of mileage in this particular story. Now, I love a Patrick Troughton story, and I love anything featuring the Great Intelligence (surely a misnomer, because, quite frankly, he’s as thick as sh*t), and having recently watched the few episodes that have been recovered, I must admit that behind a great concept, there seemed to be a huge amount of standing-around-in-tunnels-and-not-doing-very-much.  Thank Rassilon then that this new audio version (a reading of Terrence Dicks’ Target novelisation) is faster paced than the onscreen version, and manages to capture the spirit and tenseness that were lacking in parts of the original very successfully.

David Troughton’s portrayal of his father’s Doctor is spine-tinglingly fantastic, his take on Jamie and Lethbridge-Stewart are also rather excellent, and through sympathetic narration and Terrence Dicks’ writing, less likeable characters Chorley and Evans are expanded upon and made more sympathetic by giving the reader access to some of their internal thoughts and fears, and providing them with a bit more of a background.

Linked to this is the feeling that the listener has been dropped midway into a story, so needs to hit the ground running. The soldiers have history. They’ve been through the mill together. They’ve already suffered losses, and they function as a proper (ahem) ‘unit’ rather than being faceless cannon fodder. Dicks also stresses the importance of the first appearance of the Brigadier (who is still a Colonel at this point), stressing how deep the association will one day become…though this does rather undermine the plot-line that places him as a prime suspect in the mystery of the hidden spy. Still – there can’t really be any spoilers in a story that’s very nearly 50 years old!

In a nutshell then, if you like a base under siege story, are a fan of those old Quatermass serials, and enjoy the sort of camp scares delivered by Hammer studios 50 years ago, then this is for you.  Bex Ferriday