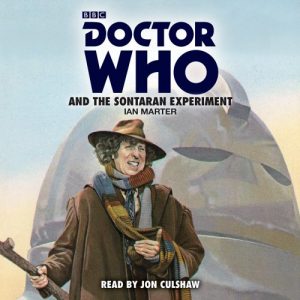 This is the first Doctor Who adventure that I remember watching on the television back in 1975, and it’s partly responsible for the start of my continuing love affair with Doctor Who and with the ‘Holy Whoumvirate’: the fourth Doctor, Sarah Jane Smith and Harry Sullivan.

The original two part adventure was shot entirely on location, the resulting grainy film a perfect accompaniment for a story that was pretty taut and sadistic. Arriving on a seemingly deserted Earth, the Doctor and his erstwhile companions discover a crew of shipwrecked astronauts from a distant Earth colony. Lured there by a fake distress call, the astronauts are being experimented on by the deadly Sontarans in preparation of a full-scale invasion of the planet. In order to save the plant the Doctor must defeat Sontaran Field-Marshall Styre. But can he do this with a broken collarbone?

I threw a bit of a curve ball at you there. Tom Baker’s broken collarbone isn’t a part of the original television script* nor is it part of Ian Marter’s rich and detailed novelisation, read here by John Culshaw (who is clearly loving every moment of this gig).  Here the travellers arrive in the TARDIS, and the Sontaran plan doesn’t involve war with the Rutans (as in the original script), but a planned conquest in alliance with another clone species.

There’s also real depth to this version, and Ian Marter’s writing makes every scene burst with colour and life. Watch the televised version by all means – but for a far richer experience, I recommend you get hold of a copy of this instead. It’s ace. And Jon Culshaw’s Tom Baker is as magnificent as it ever was. (Though I also adore his Andrew Neill.) Bex Ferriday

*Tom Baker broke his collarbone while shooting this story and had to wear a neck brace. This was abley covered by his scarf, but it meant that fighting scenes had to be done by stuntman Stuart Fell, wearing the Doctor’s clothes. Stuart fell is a small man. Tom Baker is not.