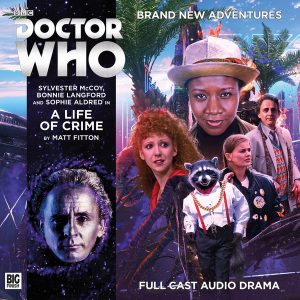 There’s something peculiarly British about the idea of a retirement community for old criminals, a place where blaggers and scallywags go to live out their final days surrounded by likeminded souls.  So it isn’t really surprising that such a community, Ricosta (a sort of intergalactic Costa Del Sol) would eventually become the centrepiece for one of the Doctor’s escapades; one that reunites him and Ace with their friend and former companion, Melanie Bush. What is surprising though, is that Ricosta has been sold from under its residents’ feet by it’s enterprising, but not very bright, native species in a misguided and slightly half-baked attempt to escape the ravages of Universal economic crisis. And as for the folks holding Ricosta’s debts, well, they’ve decided it’s time to cash in on their bad investment, but being many tentacled Lovecraftian horrors with an insatiable appetite who feast on the potential futures of their victims, they’re not interested in money. What they want is the population served up to them on a silver platter, and as they move in to liquidate their assets (quite literally), the Doctor, Ace and Mel arrive and become embroiled in a long planned heist in which no-one is what, or who, they first seem to be and one in which everyone involved has an ulterior motive. As Ricosta enters the final stages of foreclosure, it’s left up to the Doctor and his associates to save the world and make sure that the Cosmos doesn’t collapse in on itself in an unforeseen business induced paradox.

Matt Fitton’s story evolves and takes shape in a rapid, twisting and turning plot that not only mirrors the woes of modern society, but also makes fun of it by prodding its bloated torso with an incredibly sharp, intelligent and slightly satirical stick. Using the global financial meltdown and the economic bailouts of bankrupt countries by the very institutions that caused the problem in the first place (i.e. the banks) as the backbone of his tale and by imagining said institutions as giant, slathering monsters who feed off the futures of entire populations (and steal the show thanks to the spirited and inventive performances of Harry Myers and John Banks), Fitton has created a rip roaring Who adventure that’s also a savage, biting and expertly executed observation of some of the more harmful ills that continue to plague society. A Life of Crime works splendidly as both drama and social critique, but it couldn’t function without it’s exemplary cast, this time led by the always reliable Sylvester McCoy, Bonnie Langford and Sophie Aldred who, even though they’re upstaged by their foes, once again deliver heartfelt, involving performances that drive, and fuel, the narrative flow of the story.  Monstrously good fun… Tim Cundle