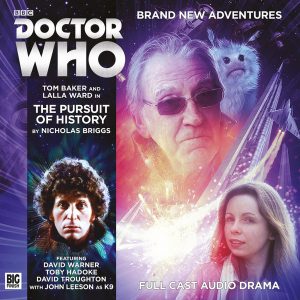 I’m going to say it; the fact that the fourth Doctor, Romana and K9 are having BRAND NEW ADVENTURES 35 years after that nasty business with the Pharos radio telescope is still something that makes me grin with childish delight. Tom Baker was, is, and always will be my favourite Doctor and my inner 7 year old rejoices as soon as she hears THAT VOICE. Of course, we’ve all grown up a bit since Baker’s 1981 swansong, and that may be why this new series of fourth Doctor audio adventures sees him playing the role with a little more gravitas and a little less showboating. This is not necessarily a bad thing (despite my love of showboating – a word I’ve now managed to shoehorn into this review twice), and far be it from Doctor number 4 to take everything seriously. Not only would that be out of character, but it would lessen the sense that he’s clearly having a great time reading these stories. So panic not; the Doctor can still play the charming clown when the plot demands it. And what a plot we have!

Our adventure begins one morning in 1850s Yorkshire. Cuthbert, (played by David Warner, a more than competent verbal sparring partner for Tom Baker) last seen in an alliance of sorts with the Daleks, heads the intergalactic business known as ‘The Conglomerate’. He’s about to rob a very special train and sell the proceeds of the robbery to the finance minister of Earth’s Oceanic zone 200 years later. But there is something else fomenting in the background that Cuthbert’s Machiavellian capitalism may only be a small part of. Meanwhile, in the TARDIS, the Doctor, Romana and K9 detect a disturbance in the Vortex, and discover energy streams coming from a being called a Laan. It looks like the threads of a plan aeons in the making are finally coming together. But who is behind this plan? And can anyone possibly escape when history is against them?

With its rather epic tone, The Pursuit of History really does feel that ‘the end of the season is nigh’. I certainly got the feeling that an ancient plan was coming to fruition and that the Doctor and Romana were completely out of their depth, and only seeing part of the bigger picture. Actually, the thought of Romana being out of her depth is pretty chilling… Bex Ferriday