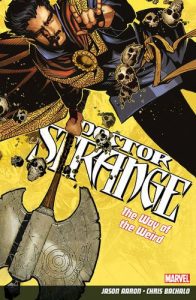 By the Hoary Hosts of Hoggoth and the power of the Vishanti, when did Stephen Strange become one of the coolest cats in the Marvel Universe?  Jason Aaron, Chris Bachalo and Kev Nowlan have imbued this book with all manner of marvellous magic, superlative sorcery and occult oddities and in doing so have transformed the good Doctor into one of the most hip and happening heroes in comicdom.  Formerly an overly stiff and serious representative of the forces that hold and bind multiple dimensions and realities together and in place, Strange has been undergoing a gradual transition to make him seem more human, more personable and more like his super-powered contemporaries for a decade or so, but it’s been a slow process. Jason Aaron must have decided that this had gone on for far too long, and in The Way of the Weird he’s stripped all of the loose weight from the slow lane, shell wearing, safe hands at the wheel approach, pumped it full of steroids and boosted it with a few hundred horse-power.  As a result of Aaron’s tinkering, Stephen Strange is now a self-deprecating, wise cracking combination of Tony Stark and Philip Marlowe who’s been granted the mystical power of a god. He’s funny, smart, incredibly perceptive and sharp and when he speaks – which he does a lot.  In fact, he never shuts up – the voice you hear in your head is no longer steeped in his old reassuring, transatlantic, blue blood clipped accent, it’s now more of a full bodied Queens born and bred drawl. He’s more street magician than fancy Vegas sell-out and he’s infinitely more likeable and engaging, as a character, than he’s ever been. And I don’t know what demon Bachalo and Nowlan sold their souls to in order to be able to create the knockout artwork that they’ve filled this book with, but whichever one it was, it was definitely the right one.

Then there’s the story, in which magic as a whole, faces its own judgement day. A terrible mechanised and technology fuelled inquisition which has steamrollered its way through almost all of the planes of existence, wiping out the arcane in all its forms and facets as it does so. In fact, there’s only one plane it hasn’t yet visited and that’s the one on which Stephen Strange is the designated Sorcerer Supreme, who when things that shouldn’t be here start appearing and when his magic starts to wane, realises that there’s something wrong and that something wicked his way comes. In between all of the crazy, bizarre personal stuff and keeping his neighbourhood safe from the things that go bump in the day and night, Strange realises that he and his magical cohorts are going to have to step into the ring and start punching back against the big bad heading their way.  It’s bruising, powerful stuff that doesn’t spare the readers sensibilities and doesn’t treat its audiences like morons, realising and rejoicing in the fact that the folks who pick up this book will be able to grasp the ideas and concepts contained in its pages with consummate and comfortable ease.  This is magic, four colour style and the Doctor is most definitely in. Abracadabra… Tim Cundle