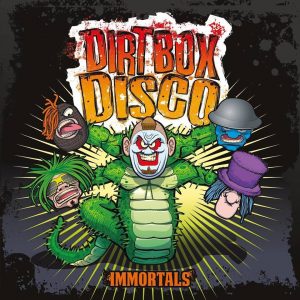 It’s an incredible album number six for these costumed maniacs – who would have thought that something started off as a bit of a laugh would not only go the distance but find a place in the blackened hearts of many a punk rocker across the globe? Well the answer is simple – just give ’em a listen! Immortals picks up seamlessly where last year’s Poppycock left off with opening tune Ready Or Not being a statement of intent – Weab and co singing that this “bunch of bastards is coming for ya” with a blasting Na Na Na Na Na chorus that lodges in your brain and can only be toppled when the next tune hits your ears. And so the album progresses and any notion that Dirt Box Disco is merely a novelty act is quickly dispelled by the fact that these boys can play, and they can also bang out tunes sweeter than a ten p mix-up from the cornershop washed down with a bottle of white cider. In fact your head will be buzzing after a few more doses of the Dirt Box heady cocktail. Lyrically it’s all done in larger-than-life cartoon style tearing up equal parts The Beano and Viz as they bang out their three-minute anecdotes about life, love and crap in general. Mixing punk rock, pop, rock music and a healthy dose of glam, Dirt Box Disco have defined and stuck to their own style, and Immortals is another must-have release. Tom Chapman