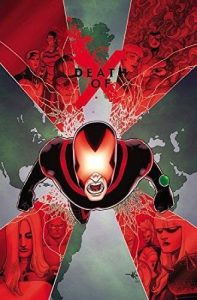 And now, the end is near and the X-Men face the final curtain. If Sid Vicious were alive to witness the havoc that the Terrigen mists unleashed by Black Bolt wreak on the mutant population in Death of X, he’d change the lyrics to Frank’s signature number in a glue addled minute, throw a two fingered salute at the Inhumans and start singing for all he was worth.  Which given inflation and increased record sales due to the cult of personality that’s sprung up around him since his untimely demise is probably quite a lot. But he’s dead, so he can’t start wailing, although I suspect, given what happens in Death of X that a large percentage of mutant fandom might start doing so when they read this book. That’s right folks, it’s time to bid farewell to some more long time staples of the Marvel Universe as the war between the Children of the Atom and the Descendents of the Kree kicks into high gear.

Answering a distress call from Muir Island, Cyclops and his band of X-Men discover that the Terrigen clouds are responsible for causing a sickness, that later comes to be known as the M-Pox, in those who carry the X-gene.  Its symptoms vary in individual to individual. Some have no reaction to it, it makes some ill and in an alarmingly high number of cases, the M-Pox is fatal in a matter of minutes. Being the reasonable, well-adjusted soul that he is, Cyclops instantly – in the wake of becoming sick himself – sees the dispersal of Terrigen and its effect on his fellow mutants as a declaration of war on the part of the Inhumans, and decides to respond in kind. While calmer minds on both sides desperately try to prevent the situation from escalating, Black Bolt and Cyclops begin to draw their lines of conflict. As with every war, there are casualties on both sides, however this time one of the soldiers who falls is a four colour big gun who during the last half century has helped shape and define the world of superheroes.  Lemire and Soule’s story is a nitrous injected, constantly evolving tale of two species taken to the brink of devastation by belief and misunderstanding that’s imbued with thrills galore and an undercurrent of profound sadness and sorrow that sums up and reflects the real world friction that exists between the faiths of the Middle East and the so-called civilised democracies. Even I’m not usually a fan of Aaron Kuder’s golden age of comics style art, it’s the perfect conduit for Death of X, a story that also dispels the notion that hero’s die valiant deaths by ramming home the truth of mortality (that the end is, more often than not, painful, messy and ugly, eventually visits everyone and invariably happens when you least expect it) in all of its cold, hard actuality. Ideas, unlike heroes, never die. Goodnight sweet prince, may flights of mutants sing you to your rest… Tim Cundle