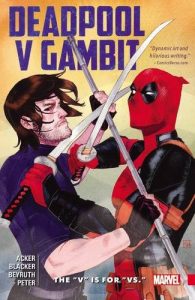 Wade Wilson really is the man of the moment; and while a more cynically minded chap might attribute his surge in popularity to the box office breaking, smash hit movie that took his peculiar brand of madness to the masses, I’d like to think that it has more to do with people finally tuning into, and at long last “getting”, one of superherodom’s most imaginative, inventive and, yes it’s true, insane players. Even though he doesn’t fit the traditional mould of a costumed do-gooder in that he’s really only into the whole “saving the world” thing for himself and the money, when push comes to shove, Deadpool can usually be relied on to do the right thing. However, Deadpool V Gambit isn’t one of those times. In fact, it’s far from it, as the likeable, but incredibly deadly, rogues whose names adorn the cover are at their self-serving, distrusting best in The “V” is for “Vs”, having embarked on new career paths as long-game conmen under the watchful, and guiding, gaze of a seemingly (and yes, you’re right, nothing is ever what it seems to be in Deadpool’s sphere of influence. Well, 96% of the time it isn’t. Okay, so it’s more like 72% of the time, but come on, allow me a little creative licence. Jeez, you lot are hard asses. Alright you win, it’s actually 61%) innocuous small time operator who goes by the name of Chalmers.

As these things often do, and after failing to heed to the advice of the adage about being bitten once, Deadpool and Gambit find themselves smack bang in the middle of rapidly deteriorating “job” involving gods, ancient artefacts, living weapons and dodgy land deals in Florida, in which they find that they’ve not only be played for suckers, but are also left to carry the can when the air circulating device and waste products finally meet.  And it doesn’t, as you’d imagine, end all that well for either of our heroes, but kind of works out for everybody else. Kind of.  Which is sort of nice. If you’re everybody else and you’re not Remy or Wade.

Blacker and Acker’s (are these guys made for each or what?) absolutely nail the characterisation and dialogue in their blink and you’ll miss it, keep your eyes on the prize tale of prestidigitation and manipulation in which the roles of hustler and victim are fluid and change more times than the excuses given by a back peddling, budget fiddling politician after he’s been caught in stockings and suspenders at his mistresses all expenses paid abode.  Fast, funny, full of more twists and turns than Space Mountain and guided by the always incredible artwork of Danilo Beyruth, Deadpool V Gambit is a double thumbs up, action and plot heavy spectacular that reminds its audience why Wade Wilson is currently sitting on the top of the Marvel pyramid. He’s there because he deserves to be. And because he rules…  Tim Cundle