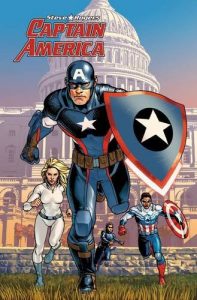 Two words was all it took. Two simple words that took less than three seconds to read sent the collective consciousness of comic fandom into meltdown.  It wasn’t the words per se that that caused the outcry, it was who said them and the context in which they were said. The bastion of truth, freedom and justice, a man who had spent his entire life fighting for everything that was right, in the middle of a mission, threw a fellow soldier out of an aeroplane and uttered a phrase that before that moment, he would (or so everyone thought) have considered to be a poisoned barb crafted and honed by his oldest foes. Steve Rogers, Captain America, after doing his damndest to kill his comrade in arms, turned to an enemy agent and slowly, but with grim determination and heartfelt sincerity said Hail Hydra. And Nick Spencer, in the book that shares its title with that devilish greeting, tells the story of how the man no-one would ever suspect of working for the world’s premier terrorist organisation became a willing servant of the Red Skull.

Hard as it was to initially digest the news that Cap was a bad guy, Spencer’s story of revelation and infiltration that follows Steve Rogers from the closing moments of Standoff through to the world changing events of Civil War II is rock solid and packed with intrigue, espionage and double cross and will make even the most ardent and die hard Cap fan believe that he’s not only switched sides, but that his heart, soul and mind belong to Hydra.  Some of the more popular fan theories, well, they’re true, but I’m not going to be the one that tells you which of them hit the nail on the head, because you know, spoilers. Let’s just say that Steve’s allegiance to evil can be traced back to Pleasant Hill, which in turn was part and parcel of the Red Skull’s meticulously planned long game to see Hydra topple global government’ s and assume total control of the world. Sewing deceit and doubt within the ranks of S.H.I.E.L.D. and the super-hero community while pretending that everything is copacetic and in ship shape order, Cap’s new journey is constantly threatened by the possibility of discovery. Mainly because he’s not quite as good at killing as he thinks he is and the newly appointed “Sheriff” of a previously lawless community doesn’t like loose ends, which Steve in his fervour to save Hydra, has mistakenly left in his wake.  And as clever as the Red Skull thinks he’s been, he hasn’t banked on the will of his nemesis and its desire to lead by example and from the front instead of working in secret, and as the Skull’s strategy gains momentum, his super-solder slowly, but surely begins to instigate his own ideas for the future of Hydra.

Hail Hydra is a chilling, cold war style thriller that takes one of the most fundamental notions of the Marvel Universe, that Captain America is one of the good guys, and flips it on its head. Seeing Steve Rogers cast in this different, cold and logical light offers a rare glimpse at just how effective he is as a tool of, and weapon designed solely for, war. Mirroring the current political turmoil, change and upheaval that’s transforming world politics for the worse, Nick Spencer’s fastidiously plotted and perfectly executed story rewrites history and mythology and is a detailed examination of the way in which the beliefs, words and actions of individuals, no matter how twisted, cruel and abhorrent they are, can alter the course of destiny for the masses.  And thanks to Suiz, Pina and Sepulveda, Hail Hydra looks simply incredible and their jaw dropping attention to detail and design is, quite literally, astonishing. We may not understand the power of the Dark Side, but thanks to the Red Skull, Steve Rogers most certainly does. Hail Hydra…  Tim Cundle