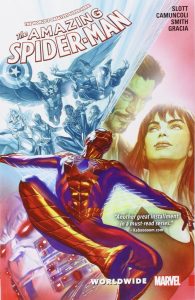 Poor old Spidey. Even when he’s on top of the world, having become the CEO of his own multi-national company, the Parker Luck won’t let him relax and enjoy it, insisting on raining on his personal parade. Sure, he’s got more money than he could ever spend in a thousand lifetimes and yes he’s achieved more than he ever dared dream was possible, but even with all of his success, he still hasn’t got the girl. Mary Jane, the love of his life, is now working for Tony Stark and given the somewhat fractious relationship that exists between Pete and the head of Stark Industries – and the latter’s well known eye for members of the opposite sex – it’s no wonder that Parker’s blood is boiling; and in Power Play things come to a head as Spidey unloads all of his rage and frustration on Iron Man.

Unfortunately both men choose exactly the wrong moment to vent their spleen at each other as there’s a new player in town, The Regent (remember him from Secret Wars?) who, true to previous form, is exploiting supervillains for his own nefarious purposes. And when criminals can’t satisfy his needs anymore, he turns his attention to New York’s hero population, and as their numbers begin to diminish and the Regent grows in power and stature, the only two men (with a little behind the scenes help from their friends) who can stop him are so focused on their “game” of one-upmanship that they don’t realise what’s happening until it’s almost too late.  Remember what I was saying about the Parker Luck? This time it’s targeting his personal life, and while he’s been saving the world, as Spider-Man and Peter Parker of Parker Industries, he’s let everything else slide. In Power Play, those things that he’s neglected hit back hard and serve as reminder that time is not only fleeting, it’s also too precious to waste on the things that just aren’t important.

I don’t know how many times I’ve said it, probably too many to count and more than is good for anyone, but for my money Dan Slott is easily one of the best writers to have ever scripted Spidey’s stories. The creative triumvirate of Slott, artistic giant Giuseppe Camuncoli and fellow top notch scribe Christos Gage are at the height of their creative powers on every page and in every panel of Power Play.  Weaving action, personal drama, intrigue, corporate mischief and misbehaviour, superb characterisation and punchy dialogue into, what is at its core, a very human story of loss, reflection and trying to do the right thing no matter what the cost may be, Slott and Gage have crafted a triumphant tale that manages to add even more depth to Spider-Man’s already congested and crammed mythology.  While it’s worth double the admission price for the aforementioned trio’s contribution alone, Power Play also zips back to the nineteen eighties with its inclusion of one of Pete’s toe-to-toe encounters with the dastardly Smythe and a second generation Spider Slayer that serves to reinforce and remind loyal web-heads everywhere (like we needed the nudge) how important, and crucial to their individual development, MJ and Pete’s relationship is. It’s a fun romp that ticks all the right arachnid boxes and delivers an extra dose of excitement, so you know; it’d be churlish to complain when you’re being given more super-powered bang for your buck.  Drop everything and forget about whatever it is you’re doing, all of that real world stuff can wait for another day. It’s Spidey time…  Tim Cundle