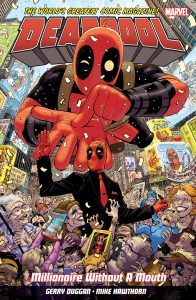 When you’re flying high, you’ve got to make napalm while the sun shines, and at the moment, no-one in the Marvel Universe is soaring higher than Deadpool. Thanks to the mainstream success of his debut cinematic odyssey and the never decreasing, always increasing quality of his book, the world is Wade’s oyster and as most four colour folks will happily tell you, “It’s about time”. And in the post Secret Wars reality, you know when everything and everyone went to the Doctor Doom shaped Hell that was the only thing left after the Multiverse collapsed, Deadpool is doing just fine. In fact, in Millionaire Without a Mouth, he’s doing a little bit better than fine. Rich beyond his wildest dreams thanks to exploiting every bit of merchandising he can, and a member of The Avengers (who he’s also helping subsidise now that Tony Stark and his money have left the team), he’s also got his own team of Deadpool’s to save the day in tried, tested and true ‘Pool fashion.

Things are, for once, it would seem, going swimmingly.  But that’s not the way it works for Wade, and before you can say “Fourth Wall? What fourth wall?”, someone on team Deadpool throws an almighty spanner in the works and decides that it’s time that Wade’s new fame, fortune and popularity go the same way as the Dodo and disappear as quickly as they appeared.  This would be fine and dandy if they went about it in a civilised and steadfast manner, but anyone crazy enough to want to be Deadpool isn’t going to follow the normal protocols; and their methodology for ending the Wilson brand involves copious amounts of uber violence and all sorts of gratuitous unpleasantness.  Forced to turn detective in order to root out the “rotten” apple before he spoils his new gig entirely, Wade goes to work and does what he does best in the only way he knows how. He sets Deadpool to catch Deadpool and in an orgy of blood, savagery, gore, viciously witty dialogue and more. And like his fellow Canucks in the Mounties, he gets his man. Millionaire Without A Mouth is funny, it’s fast and looks incredible thanks to magnificent artwork of Mike Hawthorn; and while the plot grabs you by the danglies and refuses to let go until the closing moments, the real strength of Gerry Duggan’s tale lies in the vivid characterisation that gives each member of the team a solid identity and individual voice. Each of the Deadpool’s is given the opportunity to take centre stage and, briefly, shine, while Wade’s insane new life is explored in humorous and chaotic action packed detail.  What time is it? It’s Deadpool time…  Tim Cundle