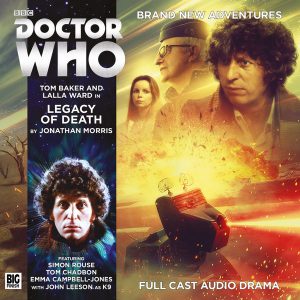 Doctor Who has always been, and will always be, the master of the cliff-hanger. Taking its lead from the thirties chapter plays, the progenitors of the nail-biting, how-can-they-possibly-escape-and-what-will-happen-next false finishes and finales, Doctor Who improved, refined and went on to define the edge of your seat ending. Week in, week out, I’d wait in nervous expectation, desperate to know whether this time the Doctor had run out of luck, despite knowing that he’d find a way to escape his tormentors’ clutches and would rally magnificently, turn the tables and notch up another satisfying victory. It was, and is, one of the many reasons that I love (hey, I’m a gown-up, I’m not afraid to admit these things) Doctor Who, and while the cliff-hanger has become less important to, and in, the Whoniverse, when one does rear its head it does so in spectacular style.  The Paradox Planet was a text book example, climaxing with the Doctor, Romana and K-9 caught in the middle a unique time war, it whipped back the curtain, gave the audience a taste of what was to come and then pulled it back with a grand flourish, leaving us (well I say us, but what I really mean is me) desperate to find out what happened next. Nobody does cliff-hangers quite like Doctor Who, and this one, this one was a late seventies special that transported me straight into the tail end of the Fourth Doctor’s tenure.

When last we left the Doctor, Romana and K-9, they were on the same planet, a millennium apart, entwined in the machinations of the Time War’s opposing forces, the future and the past. Desperate to find a solution that will bring the conflict to an end and stop a species destroying itself, they utilise every bit of cunning and trickery that they can to prevent  the bomb happy, trigger fingers governing each side attempting to secure triumph in any way they can. Jumping back and forth in time and aided by a religion that worships them as deities, the Doctor, K-9 and Romana attempt to break the vicious circle that the future and the past are ensnared in. With each side being as culpable and responsible for the war as the other, it’s a tall order, but if anyone can make the impossible possible, the Doctor and Romana can. It’s just a question of whether or not they can do it before the combatants blow to each other to kingdom come.

Jonathan Morris has, with both parts of this story, managed to weave an intelligent, thoughtful, pleasantly complex, mind bending drama filled with intriguing characterisation; the plot of which revolves around a cornucopia of wonderful ideas. Reflecting the current ecological crisis that we’re facing as a species, it questions what future generations would do if they could confront their ancestors and show them the “wisdom” of being overly reliant on wasteful, inefficient fossil fuels, while also questioning the purpose of religion and how it can be moulded and shaped to fit a specific purpose. It’s an enthralling, if slightly frightening concept that translates into a fantastic story in which the cast are on top of their game, bringing Morris’ vision to life in thrilling fashion.  Timeriffic… Tim Cundle