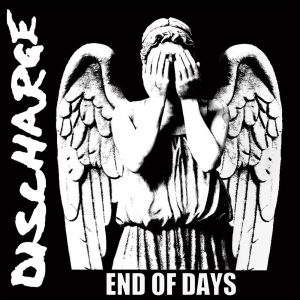 Well this was a pleasant surprise. It’s easy to get cynical about punk bands 30 odd years in to their careers being able to capture the vitality and passion they had in their youth, particularly when that band has gone through numerous line-up changes and lost the plot spectacularly  mid-way through (‘Grave New World’ anyone?). Thankfully Discharge have not only held on to the anger and energy  that fuelled their earliest releases but have unleashed one of the best (IMHO) releases of their career and likely to be one of the standout albums of 2016. In vocalist JJ Janiak the band has found probably the most apt replacement for Cal possible; on tracks like ‘Raped and Pillaged’ it’s pretty much impossible to tell the difference between them. Musically it’s Discharge with a slightly more ‘Metal’ sound than their earliest releases  most notably on ‘It Can’t Happen Here’ and ‘Infected’ in addition to the better production on this release; however it sounds more natural  than many of the forced metallic leanings of many 80s Crossover Punk bands and significantly better than the aforementioned GNW.  Fifteen tracks and not a dud among them. Ian Pickens

Music
One comment to “Discharge – End of Days (Nuclear Blast)”