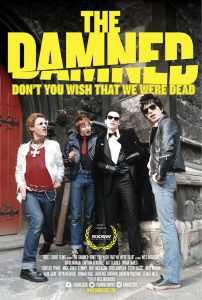 The Damned are possibly the most important and greatest band out of the original crop of British punk bands, having been the first British punk band to have released a single ( New Rose), the first to release an album (Damned, Damned, Damned) and the first to play the legendary CBGBs in New York, their music has been covered by the likes of Guns N Roses, Blondie, and The Offspring to name a few, but ask the average music fan on the street about the band and they will look towards you with a vacant gaze, that is because unlike the Sex Pistols and the Clash who have had a variety of documentaries made about them, along with a few dubious tabloid headlines the Damned have been fairly undocumented…until now that is.

When American Documentary maker Wes Orshoski was making his critically acclaimed documentary film ‘Lemmy’ about the legendary Motorhead singer Ian Kilmister, Wes had met both Dave Vanian and Captain Sensible to discuss their friendship with the Motorhead front man, it was during those meetings that Wes questioned what many Damned fans myself included, why hadn’t the band received the attention it had rightly deserved? Deciding to take on the challenge himself, resulting in the film ‘Don’t You Wish That We Were Dead’.

I know there have been various criticisms aimed at the film from fans and former band members concerning various points of the bands career not being explored in enough detail such as the ‘Strawberries’ and ‘Black Album’ era but to take forty years of chaos and somehow manage to tell the story in a couple of hours is one Hell of a challenge, and personally from the point of a Die hard Damned fan I think Wes did a sterling job.

The film captures the complete chaos of the early gigs, from stage trashing to Captain’s frequent naked performances and having witnessed the footage you have to wonder how this band are still alive although celebrating forty years as a band.

Captain relays early tales from the road that make the current crop of rock stars sound like Daniel O Donnel in comparison.

There are a few emotional scenes in the film, like the unlikely meeting of their two former bass players Paul Gray and the late Bryn Merrick in a cancer treatment hospital and the tearful Rat Scabies discussing the breakdown of friendship regarding himself Captain and Vanian.

Anybody like myself who prior to watching the film had been hoping to see certain past members reunited at the bands forthcoming forty Anniversary gig, shouldn’t hold their breath.

There are plenty of laugh out loud moments during the film such as the Captain taking the viewers on tour of the Croydon toilets he once resided at as a toilet cleaner.

What really made the band stand out from the other bands during their punk heyday was the fact they could actually play their instruments, a fact well documented during the film, what possibly held them back was they could not take themselves seriously.

After all they had a singer who believed he was a vampire and the clown prince of punk Captain Sensible on bass ( later switching to lead guitar).

And as later quoted in the film by their current drummer Andrew ‘Pinch’ Pinching, if you don’t play by the rules then you can’t expect to reap the rewards, a quote that sums up the Damned perfectly.

The film explores the bands initial break up of the band after their second album Music For Pleasure when Brian James quit the band, having been the bands initial song writer, only for the band to return as The Doomed with Lemmy on bass, quickly reverting back to The Damned and returning with the bands greatest album Machine Gun Etiquette.

And the unlikely pop stardom of Captain Sensible and how the success nearly cost him his life and sanity.

And when the band thought the infamous Damned Curse had struck again after the Captains departure they returned with a gothic transformation which would see them have their biggest commercial success, even scoring an unlikely number two hit with the cover version of Barry Ryan’s Eloise.

What really made the band stand out from the pack though was that they weren’t afraid to explore other musical avenues, particularly on the Black Album, whilst other well known punk bands were quite happy to continue to write three minute punk hits the Damned would write a seventeen minute epic gothic number, which was virtually unheard of at the time and a complete gamble for the band.

The film ends with a poignant moment as the current line up of the band play to a sell out crowd at the Kentish Town forum to celebrate Captain Sensible’s 60th birthday; the band may not be as raucous on stage these days, although musically they have never sounded better.

And with both Sensible and Vanian now old age punks, throwing themselves into the drum kit these days could end with a possible broken hip.

My one criticism regarding the film is I would have preferred to have seen less talking head moments from the likes of Eagles Of Death Metal front man Jesse Hughes, and the Offspring Dexter Holland and would have preferred to have seen interviews with the current line up, after all the current line up of the band is the most stable line up of the band having spent almost two decades together.

Whilst the band constantly refer to the dreaded Damned Curse as being the reason they never quite received the plaudits of the Pistols and The Clash.

A forthcoming sell out gig at the Royal Albert Hall and still managing to sell out credible sized venues in 2016 whilst many of today’s press darlings fail to do so you just have to ask yourself maybe the Damned Curse has been finally lifted…and rightly so.

Another triumph from Wes Orshoski, but what about his next subject matter, Ginger Wildheart anybody? Dai Whistance