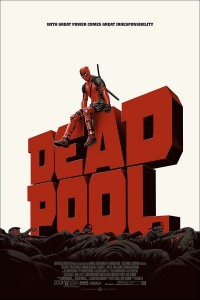 When X-Men Origins: Wolverine was released in 2009 (huh, thought it was older than that) there were two bright spots in the movie that pretty much everyone agrees on. One being Liev Schreiber’s Victor Creed and the other Ryan Reynolds as Wade Wilson. Fast forward to 2016 and comic fans finally get a movie that stays completely true to the character it is based on.

Deadpool starts by letting it’s audience know that this isn’t going to be a normal, run of the mill superhero film as ‘Pool adds a little spice to the opening credits and while this make the audience laugh, it does give you pause to wonder if this is the best the movie’s going to offer. Only for a second though, as that’s just the opening salvo in a movie that offers a lot more. And that’s lot with a capital L. In case you were wondering…

The plot goes as such: Wade Wilson finds that special someone who matches his crazy perfectly, discovers out he has cancer, goes through an experimental procedure to try to cure it which activates his latent mutant ability, Wilson goes crazy and becomes Deadpool. The villainous types who experimented on him then kidnap his sweetheart and he goes after them in order to get her back.

I won’t go too much into the movie itself as almost all of the fun it is in seeing events unfold and play out. Though, there are scenes that made me cry as I was laughing so hard, one of which involves Deadpool taking his frustrations out on Colossus and the resultant graphic injuries which are accompanied by ‘Pool’s unique commentary. And the whole stabbed in the head crudely animated hallucinations scene is so far out of left field that.. Well, honestly, there hasn’t been anything like it before. Not that I’ve seen anyway.

While everyone involved does a great job in the movie, Reynolds completely carries it, which is no small feat. Reynolds knows that this is his chance to finally do right following the less than stellar comic movies he’s previously starred, and co-starred, in. And from beginning to end, he hits warp factor ten in his performance, as both Wilson and Deadpool, his emotional range ensuring that his journey through and into darkness and the hell he goes through form the central development arc of the character without compromising any of the films intensity, or characters integrity.

While not perfect, mainly due to the lack of the supporting cast’s character development, Deadpool works thanks to a solid, if overly familiar story. But it’s a miracle that it ever got made in an age of studios pushing for almost all films released to be rated PG-13. Instead of playing it safe, they gave us R rated movie filled with very adult humour that harkens back to the action films of the 1980’s and hits the mark over and over again. They gave us the film that Deadpool deserved and needed, and for that we’ve got to thank Ryan Reynolds who pushed and pushed to get it made that way. To get it made this way. It’s chimichanga time…  Jason Bonton