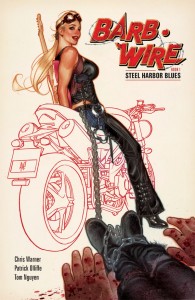 Over twenty years ago a comic came out during the time of the ‘overly enhanced’ female. Not a lot stood out about the character except, well, her chest. It didn’t work very well for the comic or the film. Which brings us to present day and it’s amazing what a good story and a proportional redesign can for a character.

In Steel Harbor Blues we’re re-introduced to Barbara Kopetski, and to be honest, not much has changed in her life. Late on bills, still runs the Hammerhead bar, and is still bounty hunting to try to make up the losses that running a bar that bleeds money incurs. As the story begins, there’s a truce between the two major gangs that inhabit Steel Harbor that is, delicate at best, which isn’t helped by the new mayor intent on bringing down gangs and criminals. Enter an enhanced permanently drunk D&D reject who bulldozes everything in his path, whom Barb begrudgingly decides to try to get the collect the bounty on while wondering if a bigger conspiracy is unfolding around her.

Chris Warner has pulled off what I thought would be impossible and that is make a Barb Wire book worth picking up, let alone enjoyable. There’s enough in the story thanks to Warner seeding future plotlines, which mixed with the adult humor, made me want to read what happens next and being to care about character I’d previously never thought twice about. The artwork by Olliffe helps immensely with this new tales of Barb, as the lines are clean yet loose and his character expressions help drive the story. Everything about this book just feels right. Let’s hope that Warner and Olliffe can keep it up. Jason Bonton